A brief encounter with Brighton… and a book

Last week I visited Brighton for the first time in perhaps ten years. I was there because The Old Ship Hotel had been chosen as the venue for the annual academic bookselling and publishing conference for which I organise the speaker programme. I discovered that there has been an inn on the site of The Old Ship since Elizabethan times. Originally just called The Ship, it acquired its venerable epithet after another Ship hotel was built nearby – this one a mere stripling dating from the period of the Civil War. Hotels in Brighton can be evocative places. I have also stayed at The Grand, both before and after it was wrecked by the IRA bomb, on both occasions to attend the Booksellers Association Conference (I liked it better before than after) and one year spent several days in a seedy little guest house when the company I was working for forgot to book until the last minute and all the hotels were full.
Brighton itself has not changed much in ten years, although it looked very odd when I arrived, because the streets and seafront were covered in grubby snow. A moderately heavy snowfall on the day before seemed to have caused a local catastrophe in which everything – public transport, the highways, even restaurants and cafés – ground to a halt. I concluded that they’re ‘nesh’ in the South of England; we clear away snow like that in half an hour in Yorkshire! Or perhaps Brightonians – if that’s the right word – are just staggered to see the white stuff at all and it therefore strikes them down with a sort of horrified inertia.
Anyway, by midday, although it was still very cold, the snow had melted and I ventured out from The Old Ship to meet my former English teacher for lunch (more about this on another occasion). Before the conference started, I also managed to take a walk along the promenade and was saddened to see the hideous buckled corpse of the West Pier, still rising up out of the sea like a squashed daddy longlegs. The structure has suffered terminal damage since my last visit.
After presentations, drinks and speeches, dinner, more speeches and more drinks, I went to bed. I was rudely awakened at about 4 a.m. by the noise of a huge crowd outside. I exaggerate only a little when I say that it sounded like the storming of the Bastille! I began to realise that my de luxe room, with its fine view of the sea, came with mixed privileges. Looking discreetly out of the window, I saw a gang of perhaps forty youths running about on the seafront, many of them braying obscenities. And they didn’t move on – they just stayed there! Brighton has obviously degenerated since the days of Pinkie Brown, who was a better class of yob altogether.
Since it was obvious that I would get no more sleep until the mob dispersed or was moved on, I adopted my usual all-purpose tactic for dealing with adversity and took out a book. It was The Mistress of Alderley by Robert Barnard, not a novelist I’d read before. Under normal circumstances, it wasn’t the sort of novel I’d have especially enjoyed. Although the setting is meant to be contemporary, the characters seem to belong to a time warp. The mistress of Alderley herself, a retired actress called Caroline Fawley, seems to me to be straight out of the set of Brief Encounter. However, under any circumstances I should have enjoyed the detailed descriptions of Leeds which number among the novel’s strengths and, while the fracas outside continued to roar, I found the descriptions of Caroline’s genteel rural life quite soothing. The icing on the cake was that it turned out to be a sham, a pretence laid bare by the murder of Caroline’s slippery millionaire lover.
I had almost completed The Mistress of Alderley by breakfast, by which time the louts had melted away and a rosy dawn was launching itself above the dead pier. 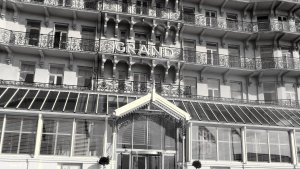 8 thoughts on “A brief encounter with Brighton… and a book”