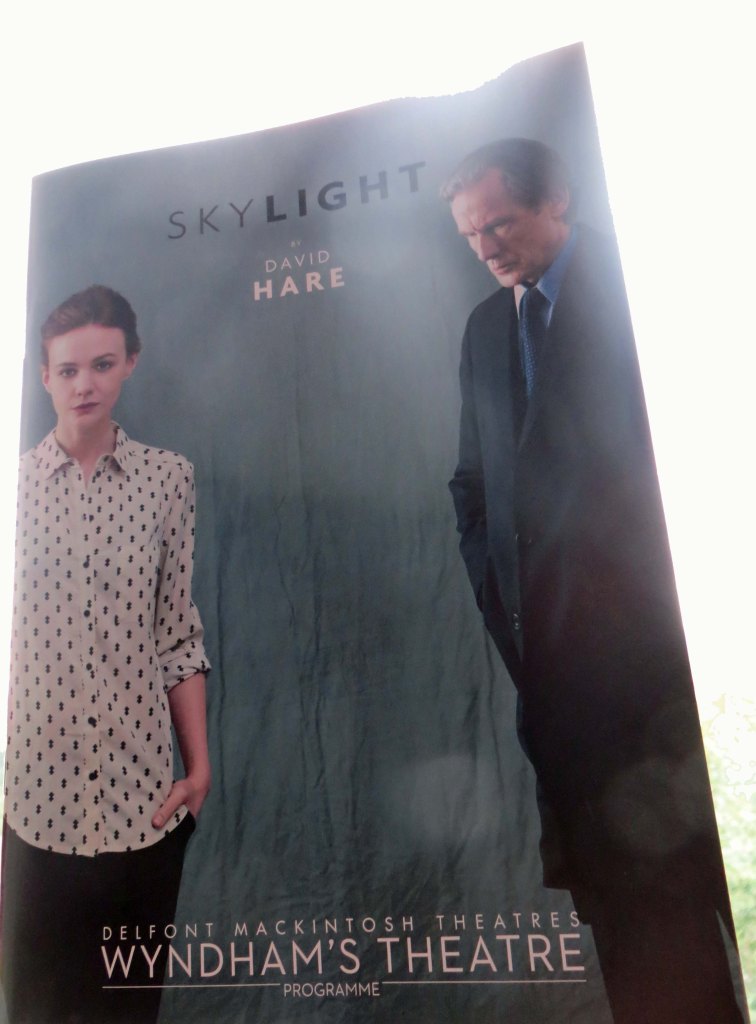 I have a confession to make: On July 1st, I went to see Skylight, the play by David Hare that has been performing at Wyndham’s Theatre this summer, and have been meaning to write about it ever since!  Sic transit gloria aestatis!  It stars Carey Mulligan and Bill Nighy – and in fact, apart from two short appearances by Matthew Beard as Nighy’s son Edward, they have the stage to themselves for the whole two-hour performance, which must require considerable stamina, especially as both play their characters with enormous energy and verve.

First performed in 1995, Skylight tells the story of an extra-marital affair between Tom Sergeant (Nighy) and Kyra Hollis (Mulligan) that draws to an abrupt close after Tom’s wife Alice finds out.  The termination is at Kyra’s insistence, not Alice’s; but reconciliation is made virtually impossible for Tom after Alice develops a terminal illness shortly afterwards.  He nurses her until she dies, an event taking place some time before the action of the play.  Kyra, who somewhat implausibly had not only been working for Tom’s business but also sharing his and Alice’s house, leaves precipitately, trains as a teacher and builds a new life for herself teaching deprived children in a run-down part of London.  Her flat, in another bleak London borough, is a long journey from the school where she works.  The action takes place just before Christmas.  The flat is cold and it is snowing.  Edward appears unexpectedly out of the blue to tell Kyra of his mother’s death.  He appears not to know why she ceased to live with his family.

A few hours after Edward’s departure, just after Kyra has taken a bath in an attempt to get warm, Tom shows up.  He gives more details about Alice’s death, but the real reason for his visit is to try to find out why Kyra abandoned him and perhaps – though he does not state this explicitly – to persuade her to return to him.  Kyra treats him warily and with irony, though a certain fondness begins to creep through.  At first, the audience is entirely on her side.  Tom comes across as a self-centred self-apologist who believes that his money can usually get him what he wants.  He is disparaging about Kyra’s job, her pupils, her lifestyle and her Spartan flat.  However, the genius of the play lies in the fact that the emphasis then gradually shifts to reveal Kyra’s shortcomings, as well as Tom’s.  This yo-yoing of sympathy for one or the other character happens more rapidly as the play goes on.  The conceits, the posturing, some element of lying or at least disregard for the truth and, through it all, the essential decency of both Kyra and Tom are exposed as the two actors deliver David Hare’s sparkling lines with convincing vehemence and wit.  The onlooker hopes against hope that they will revive their relationship.

Skylight is a miracle of good casting.  Kyra is older, more sophisticated and less waif-like than the Jenny of An Education, yet Mulligan’s performance shows something of the obstinate naiveté and acceptance of face values at odds with reality that she created in the earlier role.  Nighy’s depiction of Tom is unlike any other role that I have seen him play, though Tom’s wit, his irony, his rather louche outlook on life and the sense of melancholy vying with humour are all Nighy trademarks.  Throughout the whole performance, the actors create with consummate skill the presence of an invisible third character – Alice, for whom Tom made a skylight when she was lying in bed, too ill to look out of a conventional window.  Perhaps it is Alice who triumphs in the end.

When I attended the performance on July 1st, the theatre was packed.  I’m not sure if tickets are available for the remaining few performances before the play closes, but if you are able to get hold of one, snatch at the opportunity – plays of this calibre are rare indeed, even in the West End!

An anniversary I always remember…

Yesterday was the anniversary of my grandmother’s birth.  She was born on 9th August 1892, which means that if she were still alive she would be 122 today.  That is 164 days younger than the age attained by Jeanne Calment, the oldest verified person who ever lived, who died in 1997 (though a Bolivian man called Carmelo Flores Laura, still living, is reputedly 123).  I like to think, therefore, that she could still be alive and vying with Signor Flores Laura for the distinction of being the oldest person in the world.

My grandmother actually died on 9th February 1979, when she was eighty-six and a half.  She outlived all of the famous people who are listed as having been born on the same day as she except for one: Thomas Fasti Dinesen.  I’ve never heard of him – I’m indebted to Wikipedia for this piece of information – but apparently he was a Danish recipient of the Victoria Cross who died on 10th March 1979, about a month later than my grandmother.  Significant events that happened on her actual birthday include that it was the day that Thomas Edison was awarded a patent for a two-way telegraph and (of more interest to me and perhaps to readers of this blog) the first day of the trial of Lizzie Borden, the celebrated American murderess.

Every year when this date comes round, I pay a small, silent tribute to the strong, elegant and feisty woman that my grandmother was.  She was in domestic service all her working life, a period which began when she was fourteen and did not end until she was seventy-four, with a very short break for the birth of my mother.  She started her career, Tess of the d’Urbervilles fashion, as a poultry maid, working for an elderly lady in her native Kent.  During the First World War, she trained as a nursery nurse at Bart’s Hospital and worked in London for more than a decade, looking after the two daughters (one was adopted and much younger than the other) of a Scottish diplomat.  She then moved to South Lincolnshire to take up the post of housekeeper to Samuel Frear, the last of the great Lincolnshire sheep farmers.  He lived at a large house called The Yews.  It’s still standing, just off the main Spalding-Surfleet road.  During the Second World War, after Mrs Frear’s death, she moved to Spalding to another housekeeping job, this time working for the Hearnshaw family.  They lived in a substantial three-storey house in Pinchbeck Road.  Her final post was as lady companion to a very old lady called Mrs James, who lived at The Laurels in Sutterton.

Sausage Hall, the house that features in the next DI Yates novel (to be published on 17th November) is partly based on The Laurels.  I can remember visiting my grandmother there when I was a small child.

When Mrs James became too ill to be cared for at home, my grandmother finally retired, to 1 Stonegate in Spalding, one of three mews houses built in 1795.  These houses have since been renovated, but when she lived there they had hardly changed since they were new: the toilet was at the end of the short back garden path and, although she had a bath, it had been installed in the kitchen: there was no bathroom as such.

This house (the one on the right of the three in this picture) suited her well, because it was a short walk from Spalding town centre and just over the road from Spalding Parish Church, which she attended several times during the week and up to three times on Sundays (always clad in hat, gloves and stockings, even on the hottest of days).

As it happens, I’m just reading Servants: a downstairs view of twentieth-century Britain, by Lucy Lethbridge.  This is a meticulously-researched book.  Although accessible, it is much more scholarly than many books I’ve read on the subject, which often fall into the trap of reading like a cross between Upstairs, Downstairs and Downton Abbey.

Many of the things that Lethbridge describes remind me of my grandmother’s accounts of work in the world of domestic service, but with one exception: she clearly never found the work demeaning and, although she must have been respectful towards her employers, she certainly did not kowtow to them.  In fact, she gave me the impression that, in her day, trained servants were in such short supply that she could pick and choose whom she worked for and certainly earn a respectable salary.

My guess is that this was not because Lethbridge (or, indeed, my grandmother) has exaggerated the nature of the employer-servant relationship, but because my grandmother generally worked in a stratum of society not much covered by Lethbridge’s book: that of the upper-middle classes.  Thus my grandmother was neither subject to the rules and strictures that servants in the grand stately homes had to observe, nor was she obliged to suffer the petty tyrannies and hard labour imposed by a ‘jumped-up’ lower-middle class mistress who could afford only one servant.  The people for whom she worked were kind, enlightened, appreciative and wealthy enough to be able to pay for charladies, gardeners, maids-of-all-work and outsourced laundry services.

This is not to say that my grandmother did not work hard; I’m certain that she did.  I know, for example, that when she was working for the Hearnshaws, she was accustomed to cook Christmas dinner for sixteen people.  But the work that she did was appreciated and she had time to devote to her own preferred leisure activities: reading (especially geography books, a passion with her), fine embroidery and Christian worship.  Each year her employers enabled her to take an annual holiday, either at the seaside or walking on the Yorkshire Moors.

She lived a long and useful life and, I think, it was overall a happy one.  Reading Lucy Lethbridge’s book (which I thoroughly recommend), I am grateful to those long-gone employers for the way that they treated her.