Journey to ‘the middle of the world’ 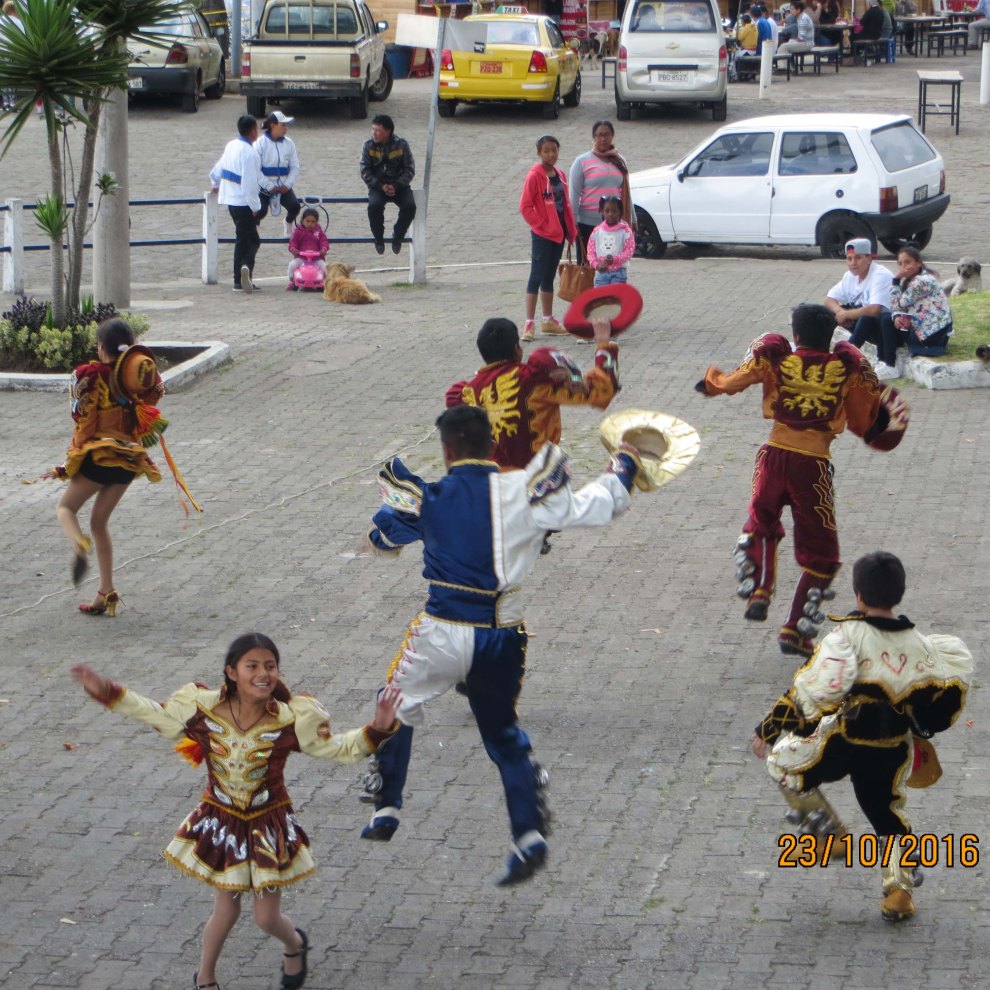 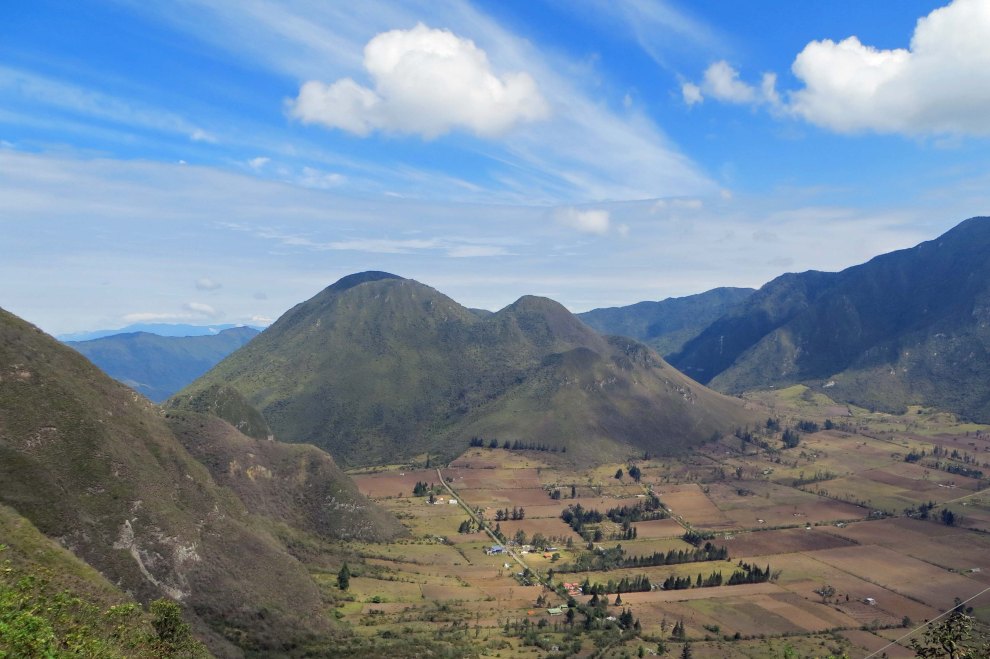 I’d never been to Latin America when I touched down in Quito and knew very little about Ecuador.  Wikipedia had told me that Ecuador was a former Spanish colony, that the first language was Spanish and that temperatures while I was there would be around 19 degrees (which turned out to be a considerable underestimate: it was hot!).  Otherwise, virtually zilch.  I’m ashamed to admit that I’ve never taken much interest in the South American continent; I’m resolved to change that now.

I was wowed by the spectacular assault on my senses which began as soon as I could see Quito from the plane.  It’s the world’s highest capital city and ringed by magnificent mountains, some of them volcanic.  And, of course, it’s right on the Equator. 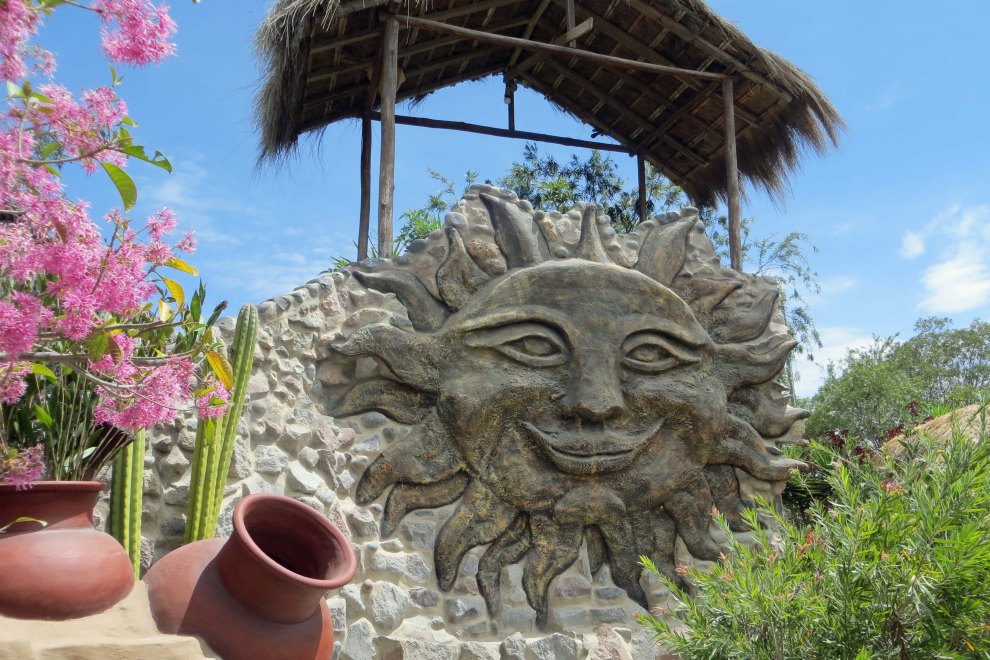 Sculpture on the ‘middle of the world’

As the plane drew nearer to the earth, I could see Quito’s imposing array of churches and some of the colourful, flat-roofed dwellings that are home to most of its citizens.  (I was to discover that only the old colonial houses have pitched roofs.) 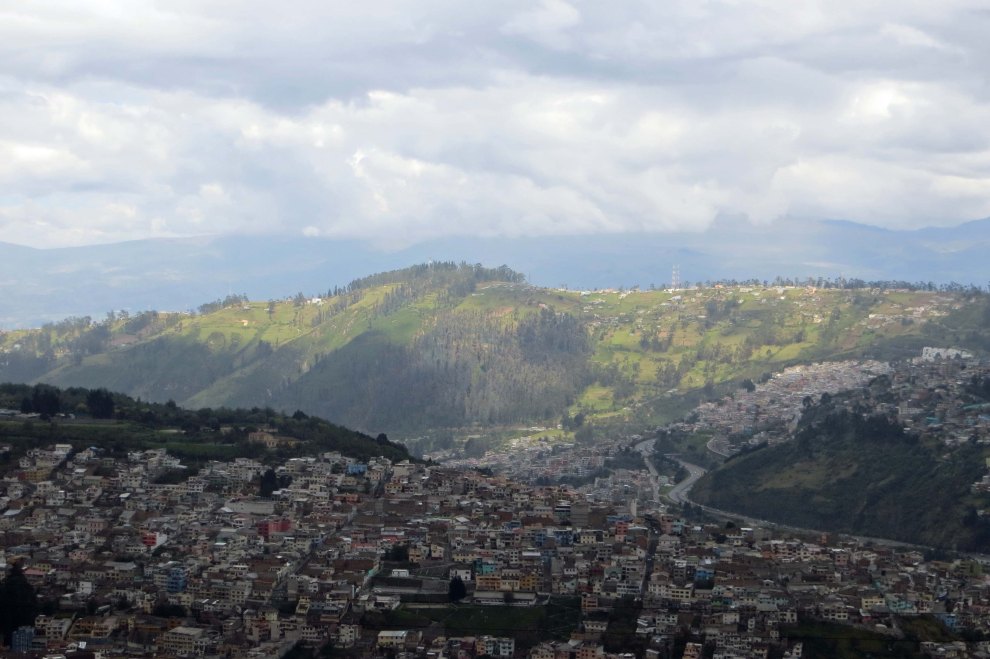 The forty-minute taxi ride to my hotel revealed more of these houses, some clinging precariously to steep hillsides with deep ravines below them, and many incomplete, as if funds had suddenly dried up.  Because there are few high-rise developments, huge areas are covered by these modest residential districts.  Quito has a population of about two million, but its large number of very small buildings makes it seem more populous than it is. 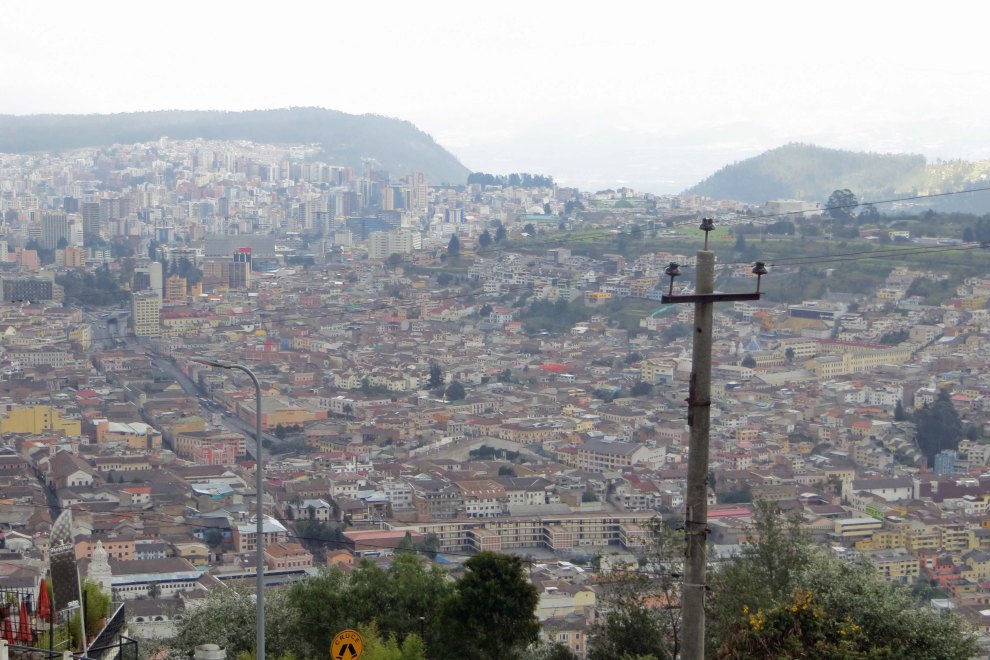 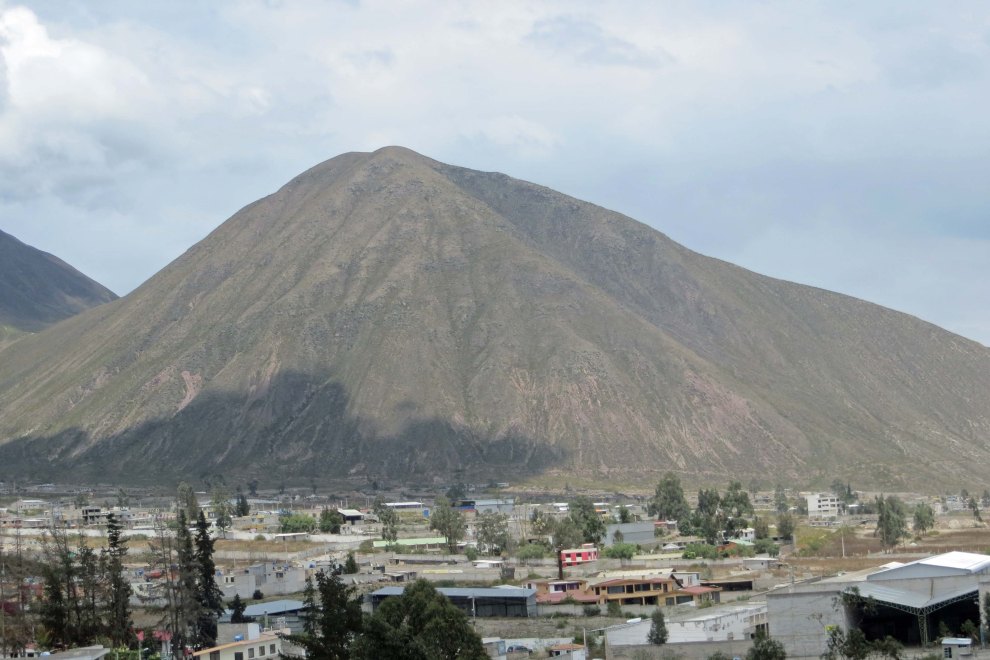 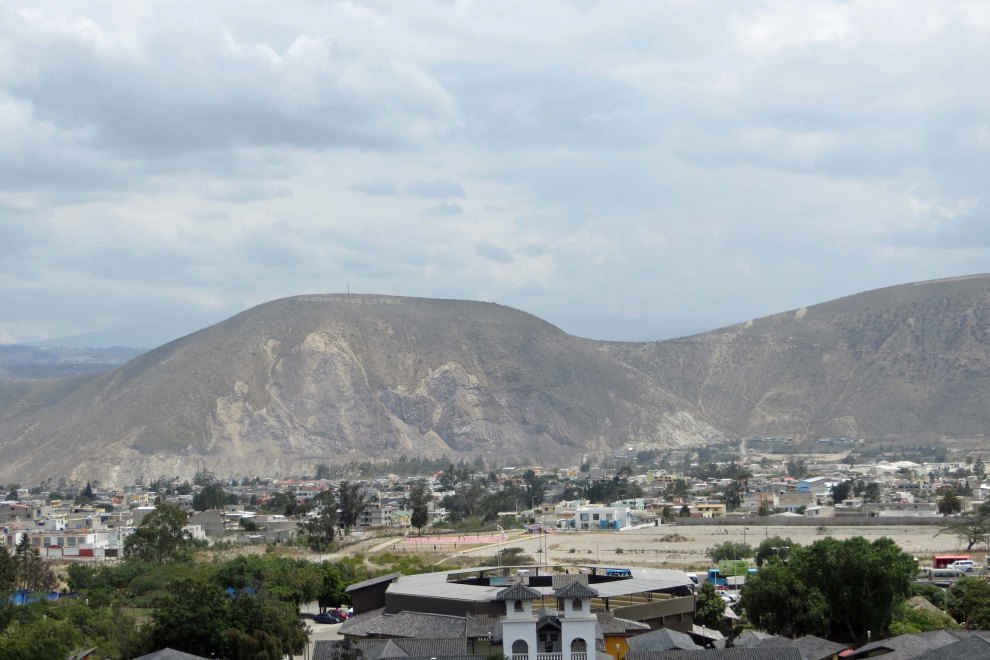 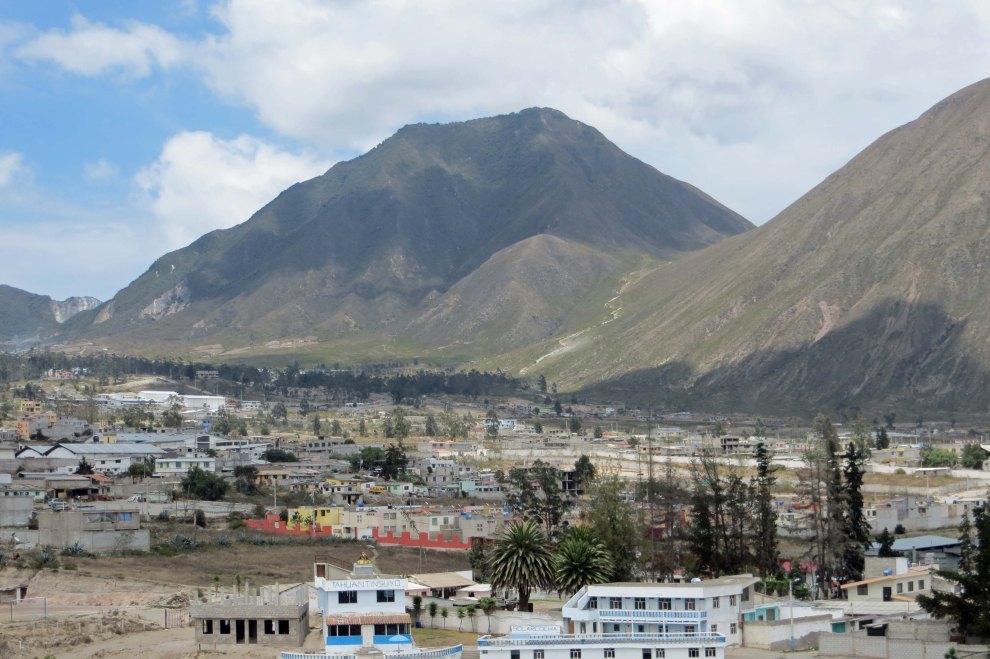 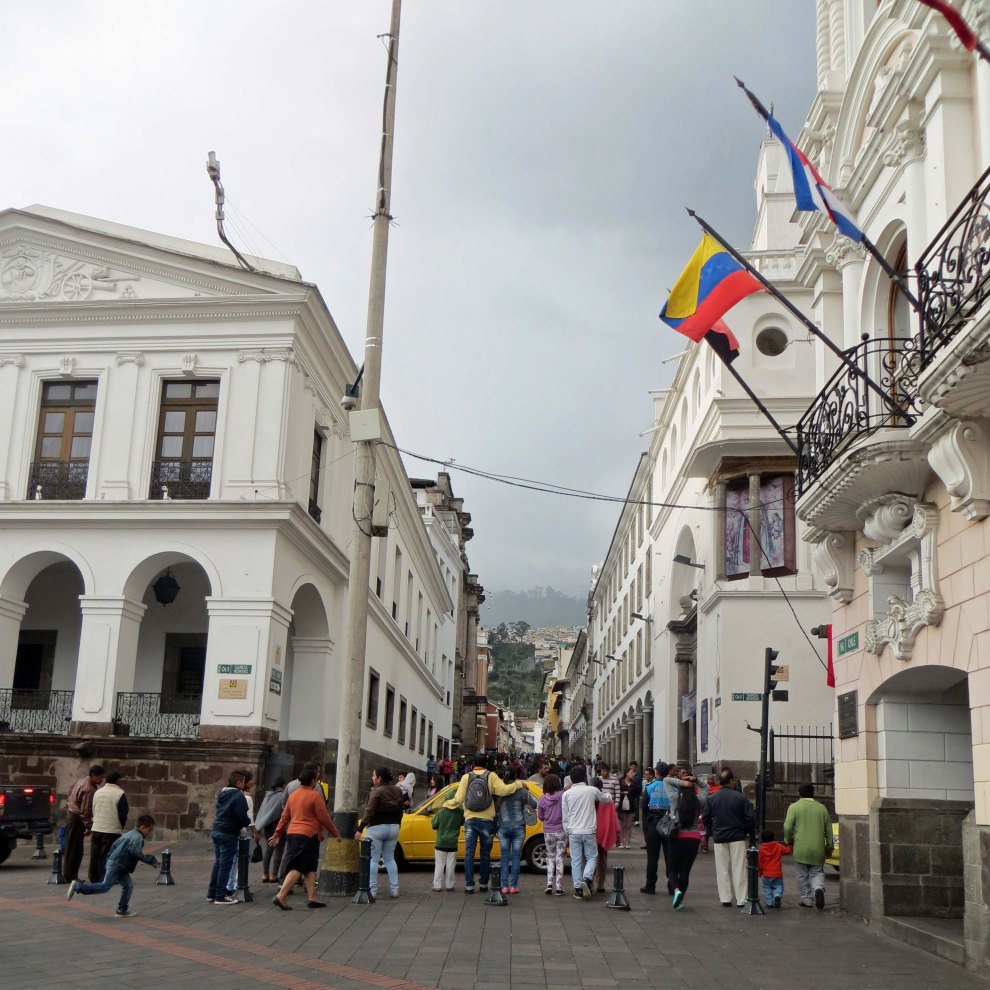 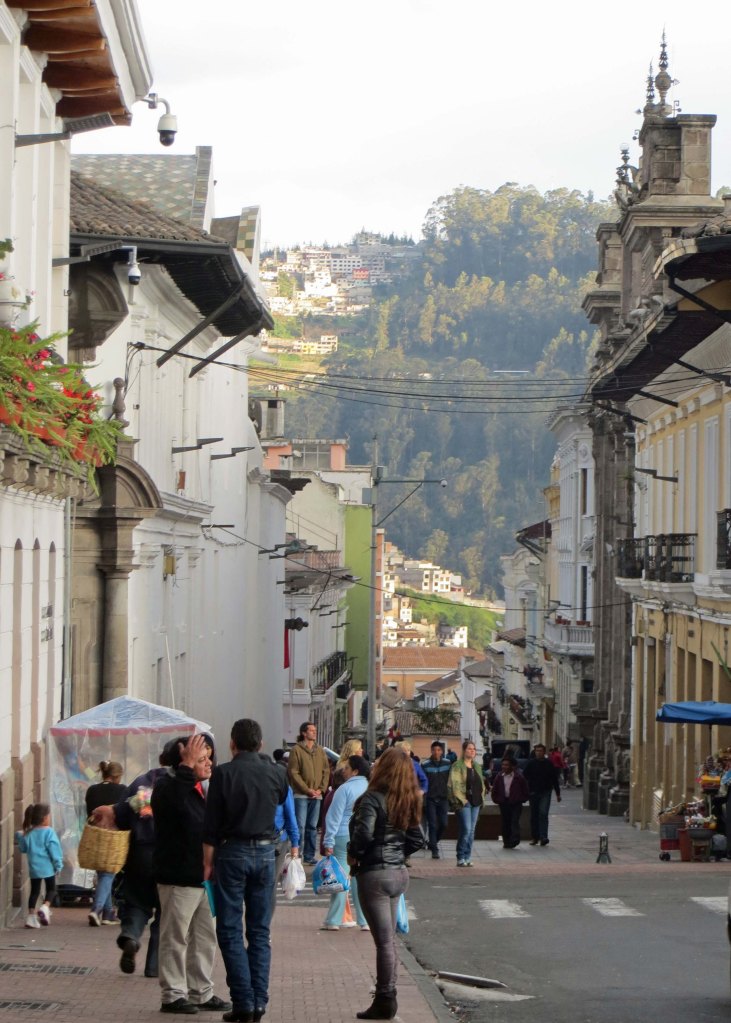 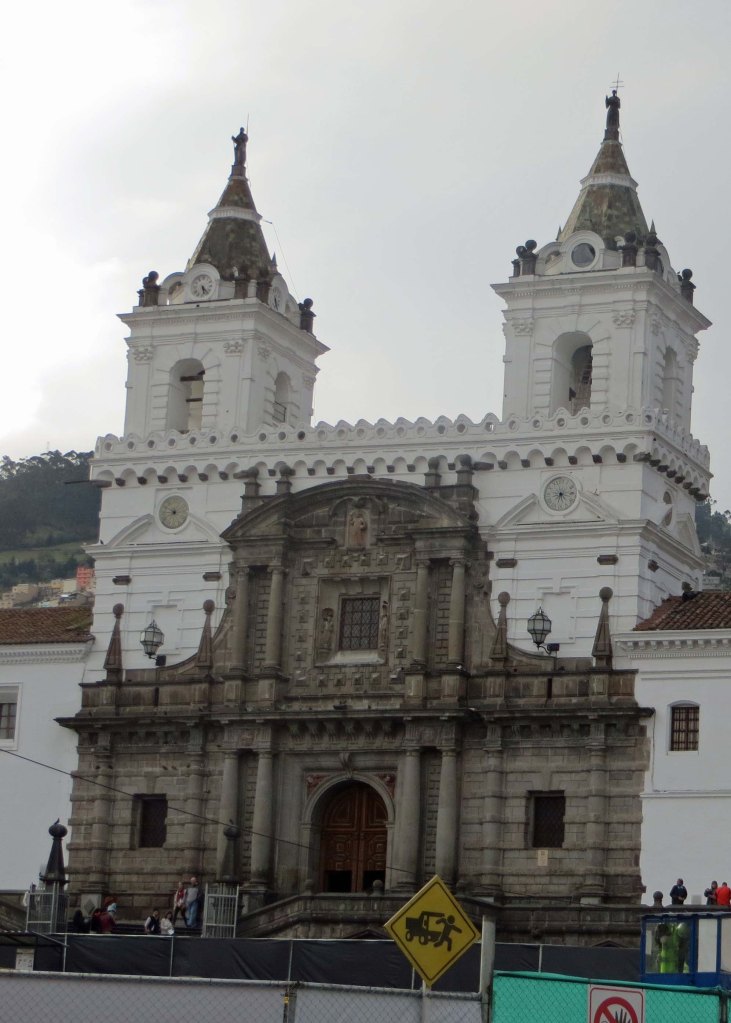 There isn’t much undergrowth, but there are many shrubs and trees, including the fabulously tall araucarias.  Most bushes and shrubs are in flower in late October, in vibrant, clashing shades of orange, purple and cerise, and are often sweet-smelling.

I asked my taxi driver what the main industries of Ecuador are and was told chemicals, including petroleum, and agriculture, especially the cultivation of flowers for export.  I’m sure that there are wealthy Ecuadorians, but most of the people seem to be either poor or, at best, of slender means.  Many of them make their living by selling things – I quickly realised there is a strict retail hierarchy.  The poorest sellers are peripatetic: they roam the streets with a very small selection of low-cost goods – sweets, water, small toys – and accost people as they pass.  Some of them are also beggars, who will offer you a sweet in return for alms; often they are women carrying small children.  Then there are street sellers with fixed spots on the pavements.  Either they lay out cloths or little folding tables exhibiting their wares, or they have small portable stalls. 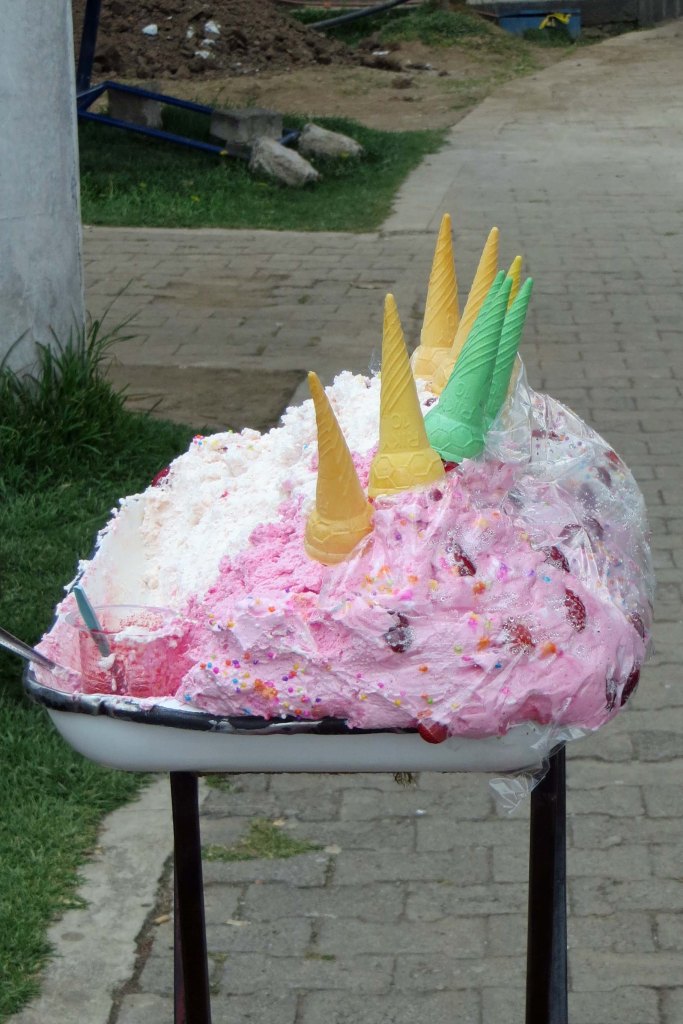 They peddle cheap souvenirs and a wide variety of foods, especially the glistening heaps of stuff that looks like ice cream but, as I discovered, is really a kind of panna cotta, and cups filled with small pearl-like balls of coloured ice, which I guess are made of frozen fruit juice.  Exotic drinks are also on sale.  I sampled one of these, a pungent, bittersweet beverage made from green tea, cinnamon and warmed fruit juice.  Apparently, it is served at funerals, with cheap cookies so that people don’t ask for too many refills!

One up again from the street sellers are the market traders.  Most operate from relatively small, covered markets; Quito contains dozens of these.  Most sell textiles, silver jewellery, upmarket groceries (especially local coffees and chocolates) and fancy goods, the latter often too gaudy for northern European tastes. 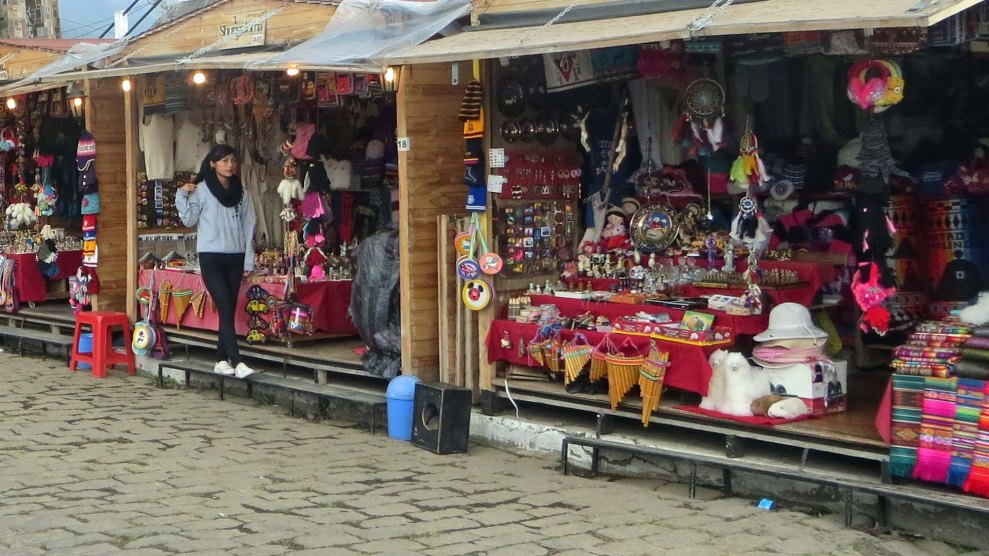 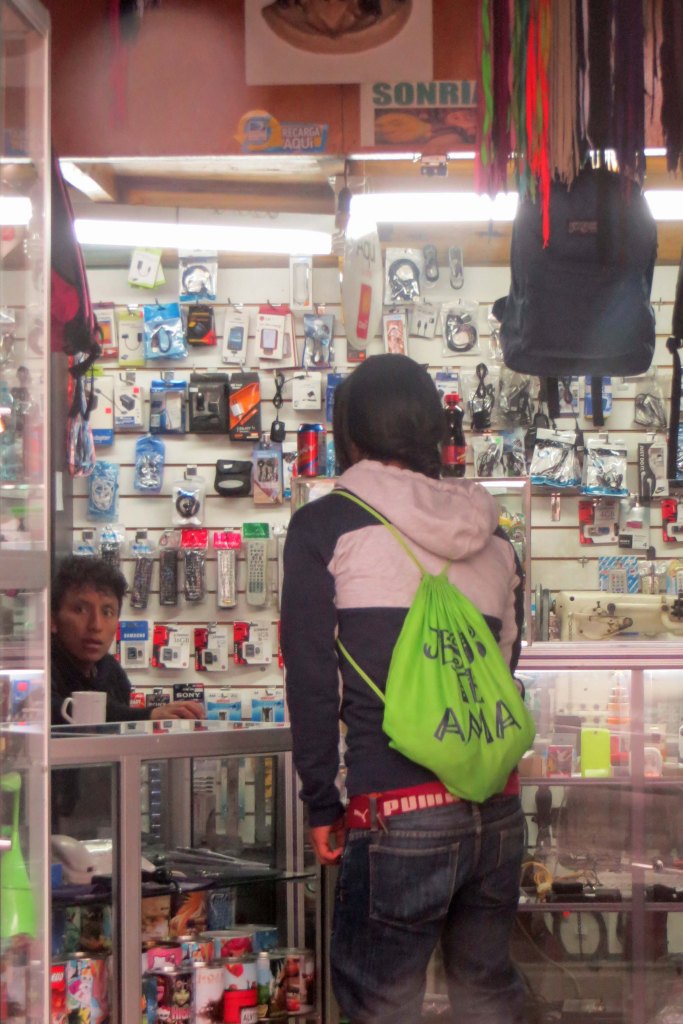 Carnival masks are a particular speciality of artisan craftsmen, and I found them both more appealing and more beautifully made than the ornate mirrors, leather-clad shots glasses, miniature shrines and fake shrunken heads which were also on sale.  It’s possible to haggle with the market traders and I found this less of a problem than the fact that they never let anyone  browse undisturbed.  Immediately you show an interest in something, they emerge from the depths of the stall to describe with great enthusiasm and speed (and in Spanish!) the many virtues of whatever it may be.  I found this approach overwhelming and usually just moved on.

Shops are at the top of the hierarchy.  Usually they are grouped in small parades or two- or three- storey malls. 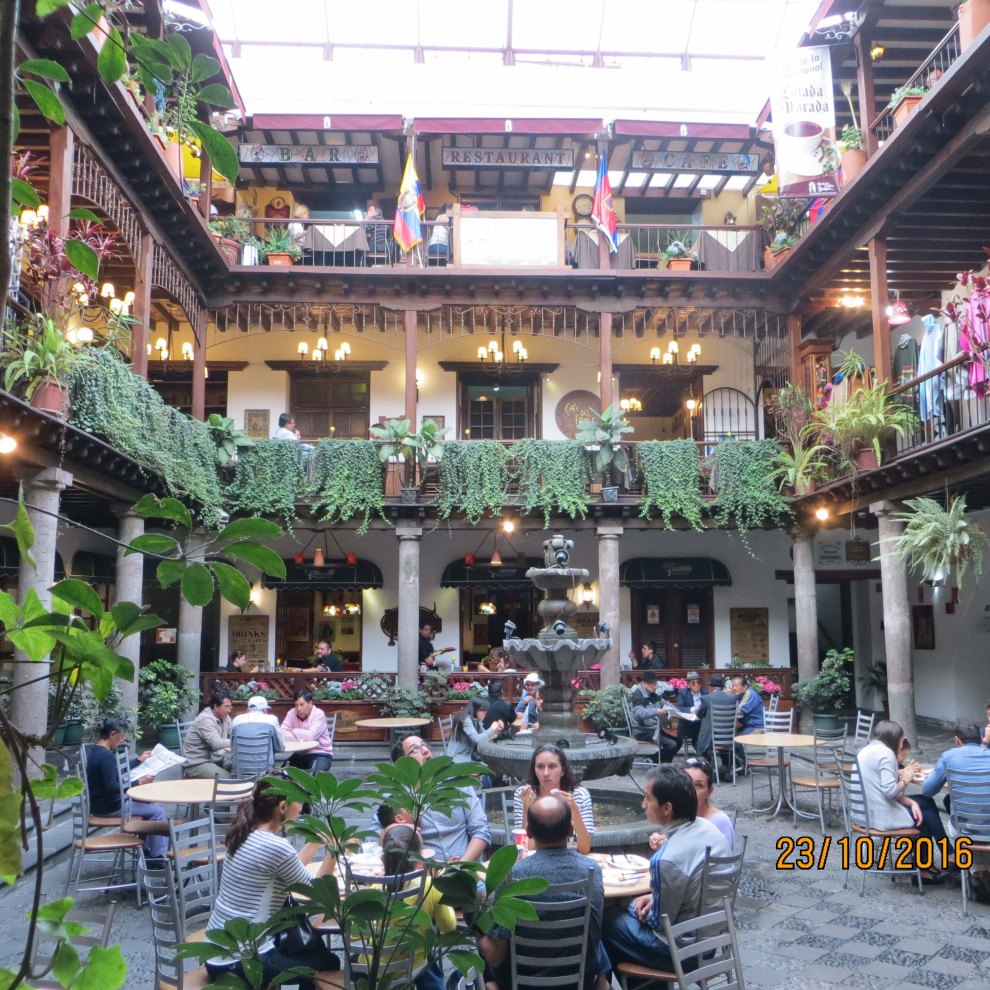 The goods they sell are generally of good quality and the shopkeepers themselves more discreet.  They won’t barter: the prices are marked clearly on what is for sale and they won’t budge; but often they charge only a few dollars more for a product far superior to what can be purchased in the market. The textiles, in particular, are made of fine wools and silks tender to the touch.   I imagine that many shopkeepers start off as street sellers and work their way up: this would explain the immense pride they take in their establishments and the impeccable displays they create. 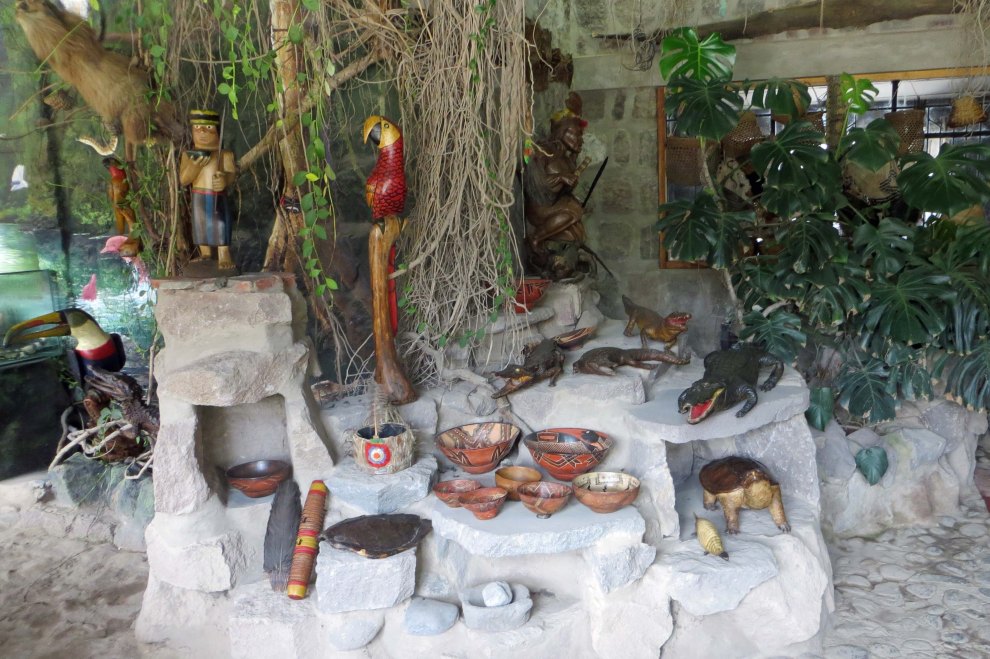 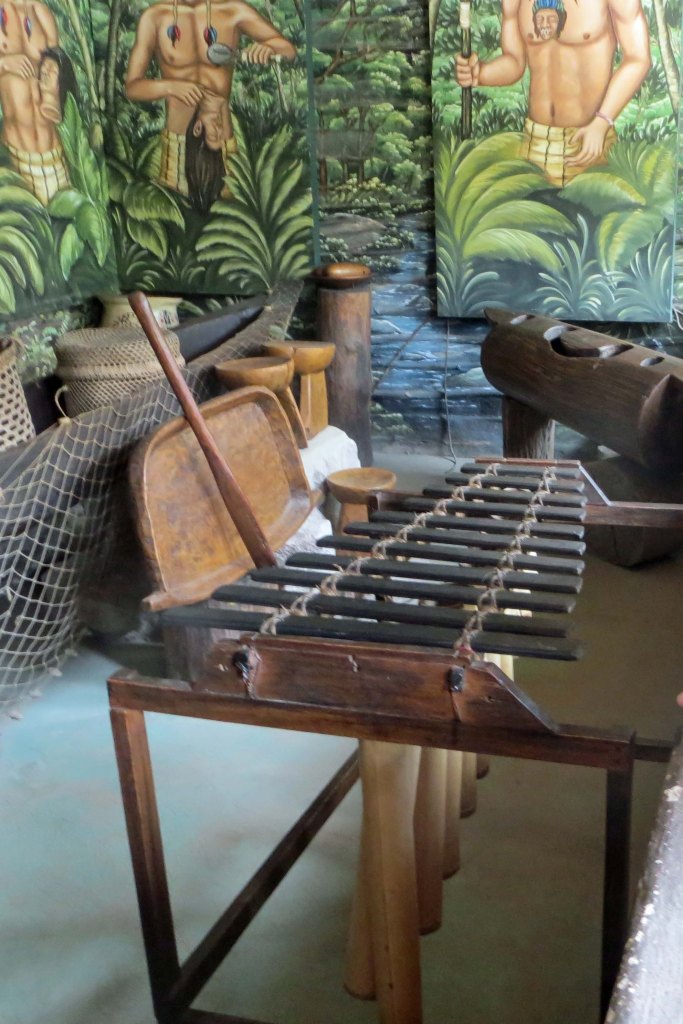 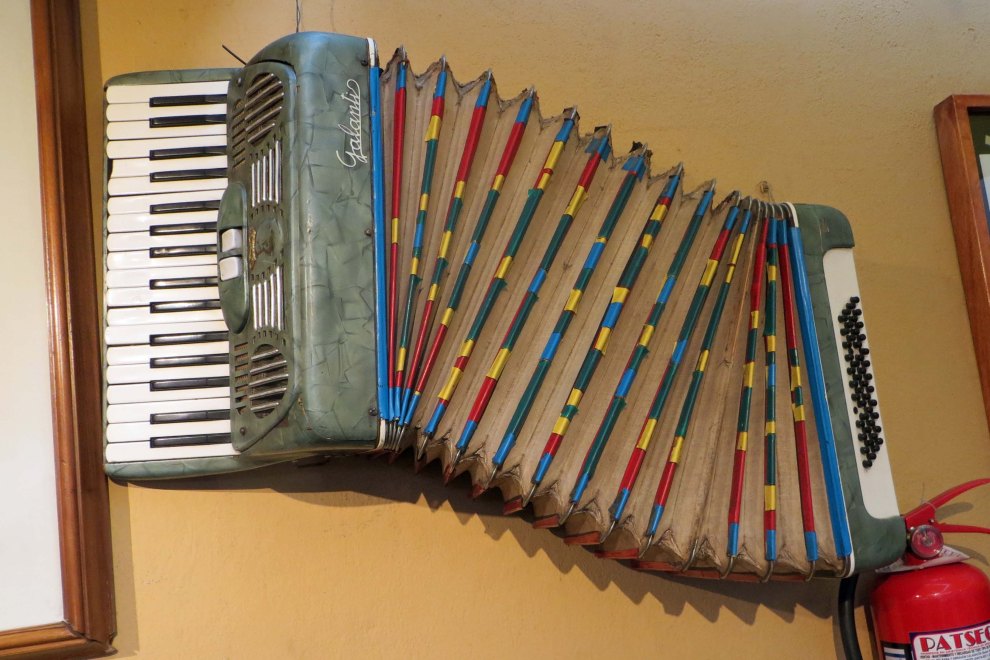 I’ve said that, from the word go, Quito made a pleasurable assault on my senses, but there was one exception: as a dog-owner with a very British love of animals, it saddened me to see the packs of abandoned dogs roaming the streets almost everywhere, even in the more affluent districts.  At first they look intimidating, especially when gathered in groups of up to ten, but I was assured by locals that they are never aggressive and don’t pose a danger to sightseers and other pedestrians.  To be fair, they don’t seem to be malnourished, mainly because both sellers and consumers of street food frequently take pity on them.  Cooked street food isn’t really my thing: I’m too prone to stomach ailments to be able to risk it; but I think even the most ardent dog-lover must find it difficult to enjoy a piping hot delicacy straight off the brazier when eating it involves having his or her every move tracked by a semi-circle of drooling, envious canines. 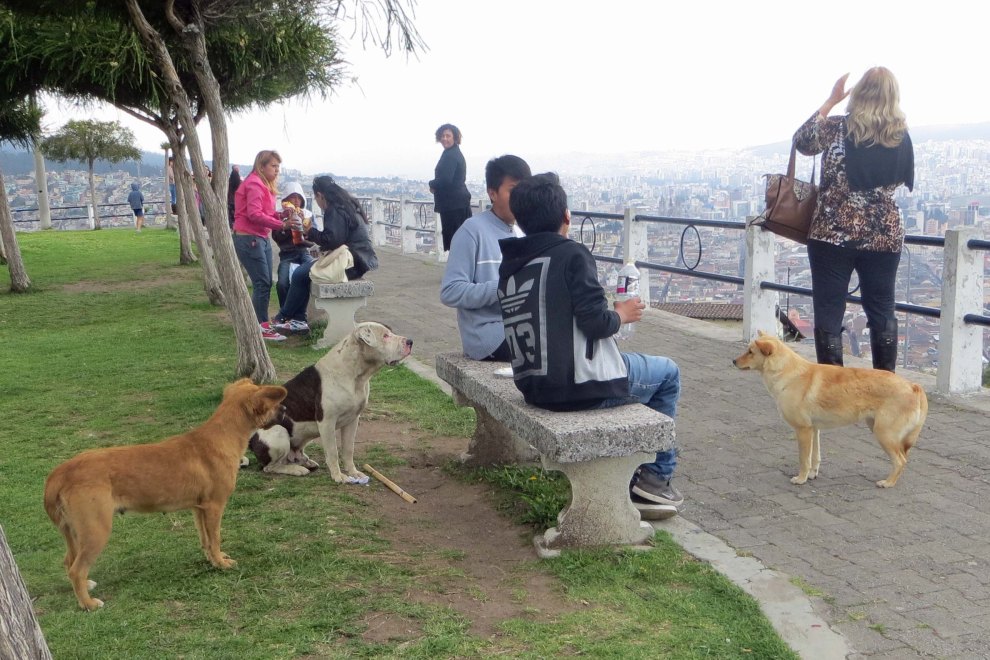 8 thoughts on “Journey to ‘the middle of the world’”