At Easter, I took a short break on the east coast of North Yorkshire and have been meaning to write about it ever since! It’s a region that we know well as a family: my husband spent many holidays in Filey as a child and, when we were first married, some friends owned a house at Robin Hood’s Bay, at which we spent several wonderful long weekends. Built in the seventeenth century, this was the house that stands nearest the sea, adjacent to the ‘quarterdeck’, or man-made apron for viewing the bay, and, on stormy nights, the waves broke right over it and the whole building shook. (It’s next door to what was the Leeds University/Sheffield University Marine Laboratory from 1912 to 1982 and now, rebuilt, a National Trust visitor centre.) The house is still there, though no longer owned by our friends. During its time, it has been several times hired by authors wanting a quiet place in which to write without disturbance (though when I visited the house its plumbing system was so eccentric that a great deal of time had to be deployed in pumping out sewage and clearing the drains!). Robin Hood’s Bay itself is the setting of the Bramblewick novels, by Leo Walmsley.
No visit to the East coast is complete without a visit to this mediaeval fishing village. However, this year, my husband and I headed a little further north, to Port Mulgrave, a hamlet near Staithes. Bleaker and more desolate than ‘the Bay’, this place really could have been at the end of the world. 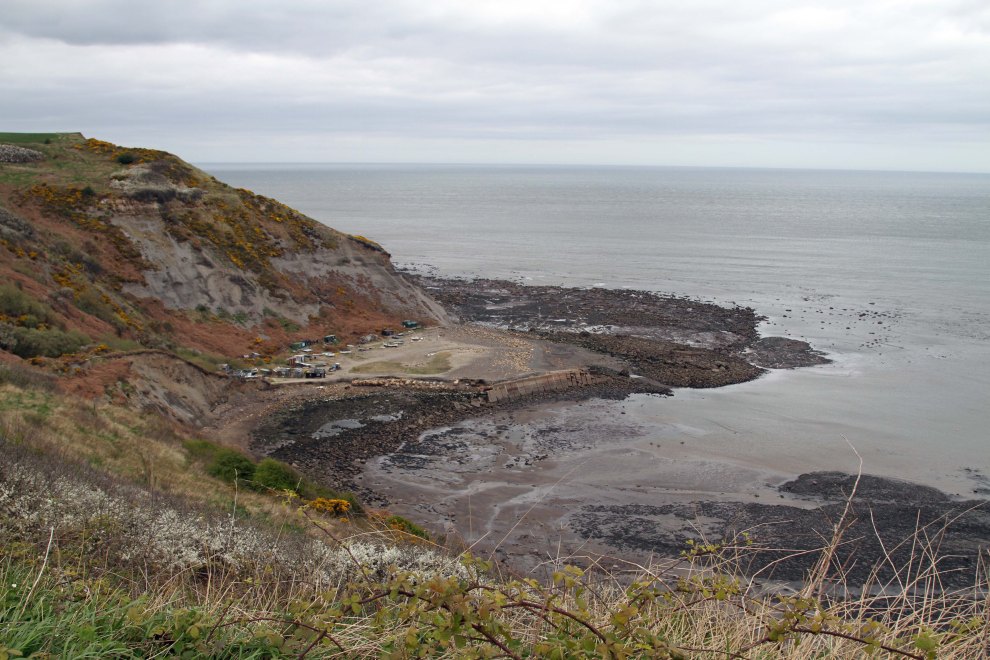 One of the most magnificent things about this stretch of Yorkshire coast is that visiting it is like stepping back into the past, but in an unpretentious way (quite unlike, for example, the self-conscious ‘olde-worlde’ well-preserved streets of towns such as Harrogate). The house in which we stayed was a massive building that dated from the period when ironstone was mined there during the nineteenth century. I’m not sure what the purpose of this building was originally: it may simply have been a dwelling for the ironstone workers, or it may have been part dwelling, part factory. Today it has been divided into several cottages, one of which was our holiday house. Intriguingly, the end cottage was burned down some time ago, without any damage having been caused to the rest of the building. Its owner still visits regularly to tend the garden and the empty space where the cottage once stood.
I hadn’t heard of Port Mulgrave before. When I came to look it up, I discovered that the Mulgrave Estate covers a massive area at the centre of which lies Whitby. By chance, on this holiday, we also happened to pass the estate office in Sandsend.

Although it was Easter, we managed to avoid the crowds, apart from an ill-advised foray into Whitby – another favourite haunt – on Good Friday. On Easter Saturday, we walked from Robin Hood’s Bay

Fulmar on the cliffs

to Ravenscar and climbed the cliff that leads to the golf links and the Raven Hall Hotel, where we bought a sandwich lunch and sat outside to soak up the sunshine.

We stumbled upon several plump seal pups at the boulder-strewn end of the beach, just before the start of the climb up the cliff. One of them growled menacingly at our dog, clearly more than a match for him (He’s a very mild-mannered dog, and certainly wouldn’t have hurt it; he stood timidly several feet away and looked in wonderment at it!). Almost full-grown, they were evidently awaiting the return of the parent seals with more food.

I’d never been as close as this to seals before and had no idea how beautiful they are. Glistening and glossy, each was a different colour. Some were dappled like horses.

I admit it, I wrote this post largely as an excuse to share with my readers their beauty and that of this magnificent coastline! Also, some Twitter friends have wondered about my promotion of Yorkshire seafood, especially crab. Now you know! I love this place and everything it has to offer.

10 thoughts on “Seal of approval!”