Where sheep may safely graze… 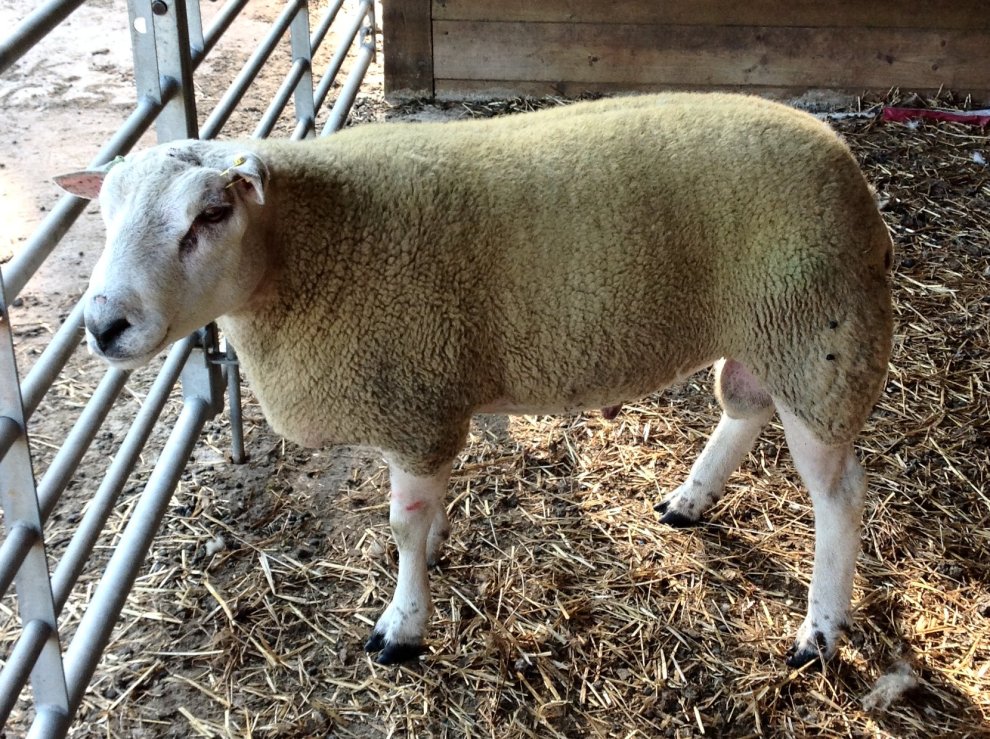 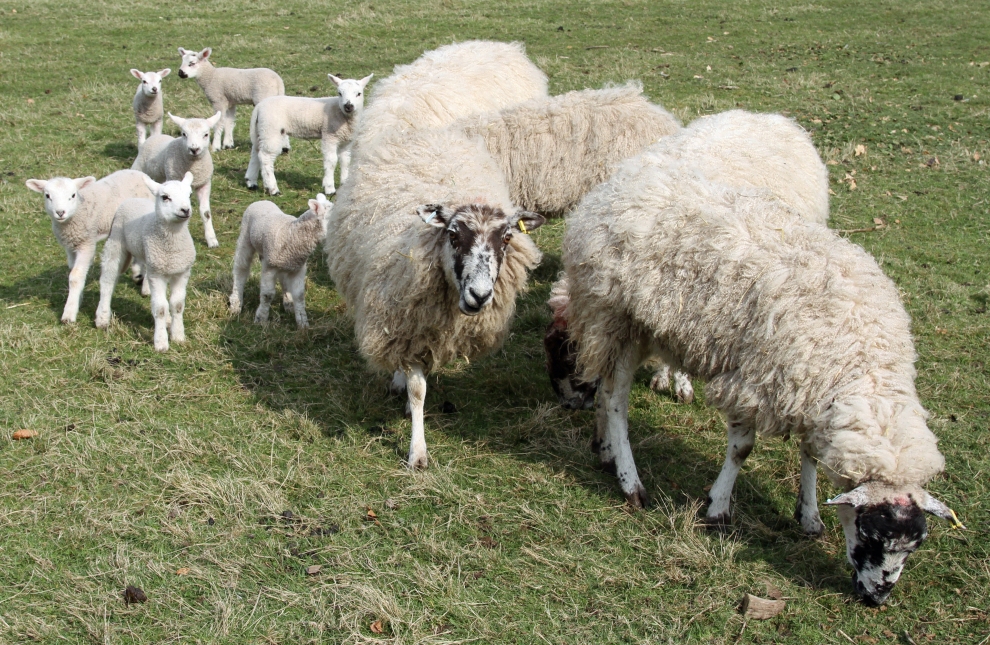 Most of Terence’s flock Supplement for the smallest triplet, to help mum…

We celebrated the start of spring this weekend by paying our friends Priscilla and Rupert a visit. We were looking forward to seeing their new-born lambs. They have eight ewes altogether, of whom four have borne a total of nine lambs (three sets of twins and one of triplets). They don’t know whether the other ewes are in lamb or not – apparently it is very difficult to tell whether a ewe is pregnant unless she undergoes the ovine equivalent to a scan, which for most farmers would be prohibitively expensive. (It occurs to me that an enterprising entrepreneur should come up with a ewe’s pregnancy testing kit!)
Whether or not the remaining ewes have been successfully impregnated, one thing is certain: Terence the Tup is in clover. Some of my readers will remember that Terence had a few runs-in with a mating harness at the beginning of the winter. Once Rupert had finally figured out how to put it on, it chafed Terence, so he was allowed to step out of it forever. This meant that his virility could not be measured. All that Priscilla and Rupert could do was wait and hope that he had triumphed.
Terence takes over the story:
You wouldn’t believe this, but that Rupert has fitted up a telescope in his bedroom so that he can spy on me. Prurient, that’s what I call it. If a ram tried that, he’d be locked up. It’s bad enough trying to get a bit of privacy when you’ve eight ladies to look after, without him butting in. He says he’s doing it on humanitarian grounds. Pah!
Everyone seems to think that I’ve struck it lucky here, that it’s an easy billet for me, with just eight women and no other blokes trying to muscle in. I’ll have you know it’s not a straightforward as it looks. For one thing, some of my girls are quite flighty. They’ll argue with each other over who should be next for my favours and then, when I pick one and take her side, they’ll all turn on me. Sometimes, that means I don’t get anywhere with any of them and I have to wait until things have settled down before I try again. Then Rupert comes out (having, I imagine, been glued to his bedroom window – you’d think he’d have better things to do) and says he’ll get rid of me if I don’t perform. You can’t win.
And another thing…  Rupert and Priscilla bought special fodder for the ewes once they thought they were in lamb, to give them the right nourishment. I’d no objection to that, but they were downright stingy when it came to letting me eat it as well. I didn’t get any of it ‘officially’. They didn’t seem to understand that I was as busy making lambs as the ladies were – busier, in fact. I’m a dad of nine now, and counting, not just a mum of two or three. They should have seen that I needed the victuals to keep my strength up.
I found a way round this eventually. I decided to cold-shoulder any lady who wouldn’t share her provender with me. It worked a treat: they all gave me some. They might not have minded ganging up on me sometimes, but if there was one thing that none of them could stand, it was being ignored. I should have tried it in the first place: they’d all have been in the club in no time. Rupert thinks that I’m getting a bit fat now, but what does he know about BMIs for sheep?
Once the lambs started to come, though, I got the boot. Seriously, it’s the truth: I know it sounds outrageous. They used some hurdles to fence off part of the field to segregate me from the girls, and fastened me in with one of last year’s lambs, ‘to keep me company’. Little whippersnapper. I give him a good head-on crack, skull to skull, whenever I think no-one’s looking. Fortunately, the telescope has been trained on the girls who’ve yet to give birth, so Rupert doesn’t see it if I’m careful. I ask you, though, what kind of maternity unit does he think he’s running here? I’m certain there are no telescopes involved in ‘Call the Midwife’.
By the way, eight of my nine are boys; they could use me in China. ‘Ramming it’, I call it.

4 thoughts on “Where sheep may safely graze…”