For the past two days, I’ve been attending a conference in York. I used to visit the city regularly when we lived in Leeds. It was a favourite place to take our son when he was young: we’ve been boating on the river there, visited the Jorvik Museum and the Railway Museum and, of course, explored the Minster. We’ve been to the pantomime and plays at the repertory theatre and we’ve always also enjoyed simply walking through the streets. In the summer, York is full of tourists; in the winter, there may be fewer, though still plenty, and there’s often a more local festive atmosphere: we’ve seen jugglers and fire-eaters performing in the shopping precinct in Stonegate, where there are also chestnut sellers when Christmas gets close. Some time ago, relatives of friends of ours lived in one of the houses in Stonegate and kept a shop there. They had to carry out some repair work and discovered that the foundations of their house included beams from an Anglo-Saxon tithe barn.
That’s the magic of York: it’s steeped in history. The people of York have handled their historical past magnificently, too. Old buildings have been repaired but not ‘restored’: there are several roofless ruins that have been tidied up but not renovated with the dubious help of ‘artist’s impressions’ of what they might have looked like in the past.
I don’t think that until Wednesday I’d visited York for the best part of ten years (apart from an ill-fated train journey home from London one Friday evening, when a signals problem meant that all trains North were diverted to York and I was dumped there in the middle of a very cold February evening, reliant on my husband’s driving more than thirty miles to pick me up – which it has to be said he did with a very bad grace, as if I’d personally invented a way of spoiling Friday night. A venial crime on his part, perhaps!). I didn’t have much spare time, but I was determined to spend at least an hour revisiting old haunts.
Reassuringly little has changed. I saw the obligatory crowd of American tourists – mainly ladies of a certain age (and size!) – who were listening avidly to their guide. I listened to her as well for a few minutes, as she told them about the Plantagenet royal family and its strong association with York. What she said was only approximately correct, but I suppose that wasn’t the point! She captured the mystery and glamour right enough. The Minster was swathed in scaffolding, as ever, as was the Dean Court Hotel that stands opposite it. I’ve stayed in that hotel and spoken there at past conferences. It’s a picturesque place, but its fabric seems to suffer from perennial crises! I walked as far as Bootham Bar and took a picture of a plaque that I’d not noticed before, dedicated to a Civil War Royalist, and another, in Monkgate, of the ornate entrance of St. Wilfrid’s, the Roman Catholic church. 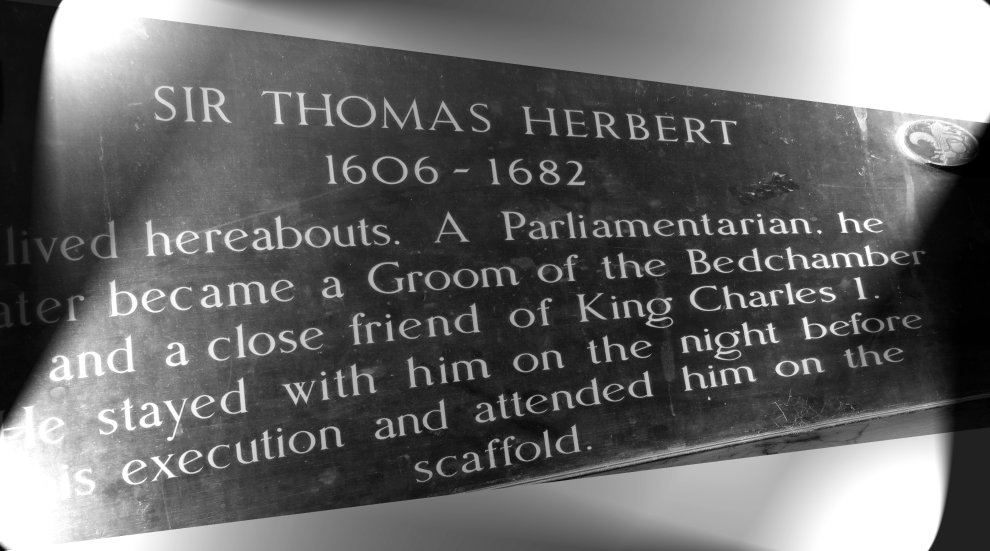 And so back to my hotel for more sessions about libraries (yesterday’s covered cataloguing, which is not the most exciting topic in the world, especially on the last perfect sunny day before the rain set in). The Royal Hotel stands adjacent to the station, so is very convenient for conferences. It is also right next to the only major innovation that I spotted during my short walk: a giant Ferris wheel, apparently named the ‘York Eye’ (I immediately thought, ‘pork pie’!). I scrutinised this from several angles, and decided that I wasn’t all that keen on it. Since the London Eye was erected to celebrate the Millennium, these wheels have become popular. I’m sure that they help the tourist industry, but I can’t help hoping that, like the Manchester Eye and the Birmingham Eye before it, this one will be a temporary installation. To me it was incongruous to see this monster looming over such an ancient city. There doesn’t seem to be much practical point to it, either. The argument for building these structures in other cities has been that they provide sightseers with a panoramic view: but in York this can be achieved simply by taking a turn on the wonderfully-preserved city walls.

8 thoughts on “A short York walk”