An old love of mine, a case of kiss and tell… 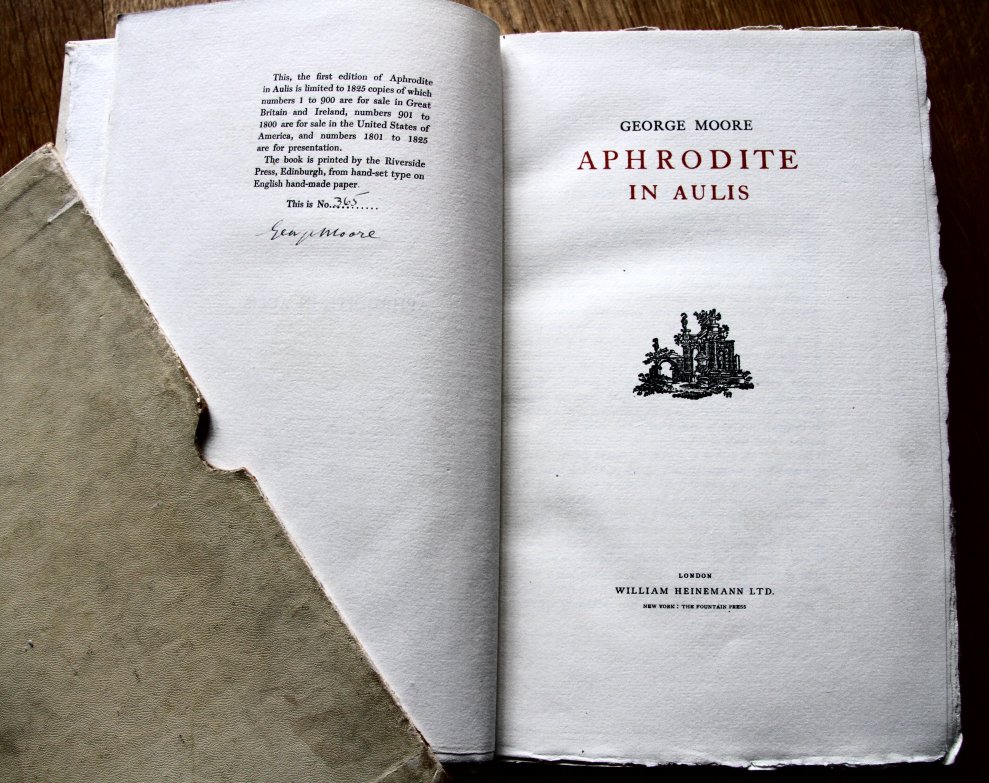 Some months ago I wrote a piece about the books on my bookshelves.  I chose a shelf at random and described how I came by the books on it and whether or not I had read them.  As I said then, for the most part my books have been shelved in a fairly random way.  The exceptions are the two shelves devoted to books about and by George Moore and his contemporaries.

I’m not referring to George Edward Moore, the philosopher, but George Augustus Moore, the writer.  As a postgraduate student, I based my research on the latter Moore and his writing career.  When I was first interested in him, only Esther Waters, his most famous book, was in print. (Later the Anglo-Irish publisher Colin Smythe reprinted three or four more of his novels.)  As a consequence, I spent many happy hours in secondhand bookshops and leafing through antiquarian catalogues in pursuit of his works.

Moore was an extraordinary character.  Born into the largely Protestant Anglo-Irish Ascendancy, he came from a family of Catholics.  (This lends some credence to their claim that they were descended from Sir Thomas More, a tale Moore himself loved to retail, though there is no positive proof that it’s true.)  The Moores were, in fact, members of the more modest, untitled squirearchy.  Setting little store by education and the Arts, they spent their time managing or mismanaging their estates and racing horses.  The only one of Moore’s ancestors who had shown the remotest interest in literature had lived as a recluse in the second half of the eighteenth century, spending his days writing a history book that was never published – not a propitious precedent when Moore himself began to exhibit literary leanings.

His first love was painting, or at least he used that as his pretext for travelling abroad.  Like many Irish artists and writers, he felt stifled by his country.  When he came into his inheritance at the age of twenty-one, he departed pretty swiftly for Paris to enrol himself as a pupil at the Académie Julian.  There he became an early appreciator of the French Impressionists and actually struck up a friendship with Édouard Manet.  Moore was a kind of nineteenth-century gentleman’s equivalent of a groupie: he insinuated himself into the Impressionists’ consciousness by spending many hours at Les Deux Magots, the café that they frequented.  He was later to pursue Zola and other authors of the school of French Naturalism in the same way.

Eventually realising that he hadn’t the talent to become a painter, Moore took up writing as very much a second-best profession.  He wrote several passable, if bleak, novels in naturalistic mode, the best of which is, in my opinion, not Esther Waters, but A Drama in Muslin, a captivating satire on the Dublin marriage market.  In common with other exiled Irishmen, Moore was often at his most eloquent when he wrote about Ireland.  He was also an observant early adopter: Another of his Parisian acquaintances was Édouard du Jardin, who had written a book entitled Les Lauriers Sont Coupés; it embodied a style that has been dubbed ‘the melodic line’ and was actually the forerunner of the stream-of-consciousness technique;  Moore wrote several evocative novels that employed this device, including The Lake, the haunting story of a priest who loses his faith and orchestrates his own disappearance by leaving his clothes on the banks of Lough Carra as if he had drowned, swimming across the lake and escaping to take passage for America (Moore Hall, Moore’s ancestral home, was built on the shores of this lake.).

After many years in exile, Moore was persuaded by W.B. Yeats to return to Ireland to take part in the so-called ‘Gaelic Revival’.  Moore’s own account of this sojourn telescopes the length of time that it took; in fact, he spent most of the first decade of the twentieth century back in Ireland, working with Yeats and other luminaries, including J.M. Synge and the Irish mystic poet AE.  Not that Moore ever really worked very closely with anyone: he was a past master at ‘doing his own thing’.  His true masterpiece dates from this period.  It is a two-part work entitled Ave Atque Vale (later changed to Hail and Farewell; the original title was simultaneously designed to poke fun at Moore’s own lack of Latin and the pretentiousness of his literary colleagues).  It purports to be a factual history of the Gaelic Revival, but is really a highly-polished satire of how it unfolded in spirit.  Once it was published, Ireland became too hot to hold Moore once again.  He retreated to London, where, in his later years, he devoted his energies to writing whimsically discursive stories based on Greek and Roman mythology and Christianity.  These were produced in beautiful limited editions that were sold by subscription. I am the proud possessor of two of them, Aphrodite in Aulis and The Brook Kerith.  It was typical of Moore that the latter, his account of the life of Christ, was based not on the Gospels, but on the writings of the Essene heretics.  To the end, Moore loved to stir up controversy whenever he could.

This was true also of his private life, which was possibly more blameless than he would have had people believe.  He never married, but conducted a number of clandestine affairs with well-born women, the most scandalous of which took place with Maud Alice Burke, an American heiress, prior to her marriage to Bache Cunard, heir to the shipping line.  Later, transformed into the society hostess ‘Emerald’ Cunard, she resumed the affair, until Moore was ousted from her affections by Sir Thomas Beecham.  Moore was widely reputed to be the father of her daughter, Nancy Cunard, herself a writer and friend of Hemingway and Ezra Pound.  He encouraged his friends and acquaintances, including Nancy herself, to believe in the truth of this rumour.  However, the gossip went that his sexual prowess was in some doubt.  When he was still a young man, a contemporary had jibed that ‘some men kiss and never tell; Moore tells but never kisses’.  He never lived this down.

Sadly, Moore Hall was burnt down in 1923 in one of the recurring cycles of the Irish troubles, not because Moore was an absentee landlord, but because his younger brother, Colonel Maurice Moore, served in the British army.  I have visited the ruin twice.  It is one of those unhappily poignant roofless  Irish mansions, its walls still standing foursquare, the windows blank, the floorless interior home only to the spinney of gangling trees that poke above the parapet in their quest for light.

What do my thoughts about George Moore have to do with crime fiction?  He certainly doesn’t write about crime, except obliquely: he is less incisive than Dickens, but as a young man he was concerned with and wrote about the social ills of his day.  His works are perhaps not of the first rank, though Hail and Farewell comes pretty close.  He is not my favourite writer – that is certainly Jane Austen – nor even one whose works I re-read many times.  But I feel that George is part of me; decades ago, he succeeded in getting under my skin.  In some way, therefore, I am certain that he has also inveigled himself into the fabric of my writing.

4 thoughts on “An old love of mine, a case of kiss and tell…”