Cake, coffee and crime, a killer combination in The British Library 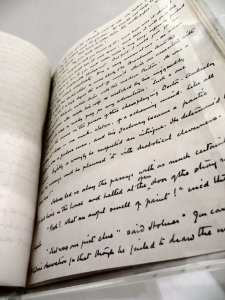 Yesterday, London was in the grip of one of those gloomy, fog-bound days of which Dickens wrote so eloquently. The streets were grey and obscured by swirling mists so heavy that they fell like grubby rain on clothes and hair. People were scurrying about, heads down, doing damage with their umbrellas.
The British Library shone, as always, an oasis of light, heat, calm and coffee… and, importantly, cakes. I went to the café there to meet a colleague and, our business done in ten minutes, we had a wonderful time drinking in the power of George III’s magnificent book collection (which is displayed behind glass and occupies the full height of the building) while eating chocolate pastries.
My colleague had to leave at midday, which gave me an hour to kill before my next meeting. This was just as I had planned, because I had picked up from Twitter that a Crime Writing exhibition is currently on display there.
Sponsored by the Folio Society (which has apparently published quite a lot in the genre, a point to remember when trawling secondhand bookshops for old Folio Society titles), the exhibition takes an alphabetical approach to crime writing. It consists of twenty-six glass showcases, one for each letter of the alphabet, each one showing or explaining some aspect of the crime writer’s craft. Unsurprisingly, ‘A’ is for Agatha Christie; ‘Z’, less obviously, for ‘Zodiac’ – i.e. for crime writing based on the occult.
It is an inspired way of celebrating the genre. My favourite letters included ‘L’ for lady crime writers – I had not realised that until P.D. James published her debut crime novel, Cover her Face, in 1962, the fictional lady sleuth had pretty much dropped out of sight since Victorian times – and, of course, ‘B’ for Baker Street. The Holmes showcase included some specimens of Conan Doyle’s manuscripts (which I photographed before I was told to put away my camera by a security guard – I honestly had not realised that photography was not allowed!). I revisited many crime-related topics that I’ve researched myself, often presented in ways that made me regard them anew, and discovered some fascinating facts; for example, that Wilkie Collins’ estimated annual income from The Woman in White (published in 1860) was £60,000 p.a.
This equates to about £4.5m today. It and many of the other exhibits served to prove that, right from the start of its inception as a genre, crime writing could be made to pay. The exhibition, which is free, takes about half an hour to absorb. I highly recommend a visit if you get the opportunity – especially if it is raining and you are struck down by a pressing need for coffee… and cake.

6 thoughts on “Cake, coffee and crime, a killer combination in The British Library”