This depiction of grief is brilliant… 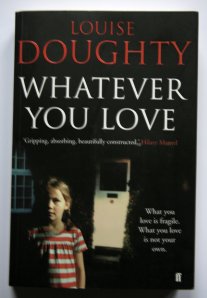 I have just finished Whatever You Love, by Louise Doughty.  Although I have read some of the author’s journalism, I didn’t realise until recently that she is also a novelist.

Whatever You Love is a highly-accomplished and sensitive novel about a mother’s sorrow after her nine-year-old daughter is knocked down and killed by a careless driver.  The novel describes Laura’s progress through grief and how it changes her and her relationships with others, yet nowhere does the account become maudlin, tedious or sentimental.  Running like a thread through the story is the history of her relationship with her husband, the child’s father, an impetuous Welshman who has dumped her for one of his work colleagues.  A lesser author might not have been able to escape the minefield of clichés offered by this situation, but the intricacies of Laura’s relationship with David are teased out and presented with great subtlety.  Although Laura herself tells the story, it is clear that she was not an entirely innocent party when her marriage broke down and that her current relationship with David is not simply inspired by negative emotions of mistrust and jealousy. There is real warmth in some of their encounters.

Although this book doesn’t really belong to the genre of crime fiction, several crimes take place: hit-and-run; dangerous or careless driving (the police down-grade the hit-and-run crime, much to Laura’s chagrin); the sending of poison-pen letters; threatening behaviour.  At least one murder is contemplated, though it doesn’t take place (or so, on balance, we believe – the author introduces a certain amount of ambivalence here), but the most profound crimes in the novel are those committed against the soul.  Each of the main characters suffers deeply and each is, to a certain extent, the author of his or her own misfortune; overarching this is the sense that they are pawns in a bigger game – to survive, they must adjust to what Fate has given them.  Not all of them make it.

I’m delighted to have come across Louise Doughty’s fiction and even more delighted to discover that she also writes about the Fens.  I’ve now bought Stone Cradle, a novel set in the late nineteenth century and in the area in which I grew up.  Not many writers set their work in this region – Graham Swift and Charles Dickens are the only ones who spring immediately to mind.  I’m certain that the power of Louise Doughty’s pen will capture to perfection the unique grandeur of the Fenland landscape.

2 thoughts on “This depiction of grief is brilliant…”