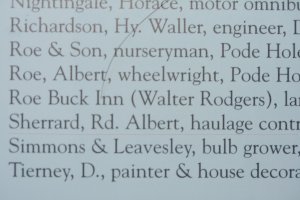 Yesterday I mentioned that I have recently bought several books about South Lincolnshire to aid my research.  One of these is Aspects of Spalding Villages, by Michael J. Elsden.  It is a book of photographs with quite an extensive accompanying text drawn from contemporary newspapers and other documents, such as old trade directories.

Among the many fascinating sections is one on Pode Hole, a hamlet between Pinchbeck and Spalding, which became important when a pumping station was set up there in the late eighteenth century to reduce the threat of flooding.  It was a place to which I often headed when out on bike rides.  Its system of sluices represents a complex and quite awe-inspiring feat of engineering.  However, of more interest to me were the rather quaint by-laws relating to the pumping station, which were posted in full on a board in front of the main building.  When I visited Spalding shortly before last Christmas, I was intrigued to see that the by-laws notice is still there. It’s a sturdy production, set in stone like a fenlands version of the Ten Commandments.

The section in Michael Elsden’s book that is headed ‘Trades and Business People in Pode Hole in 1937’ includes the entry ‘Sherrard, Rd. Albert, haulage contractor, Pode Hole’.  It leapt out at me because Richard Sherrard (whose middle name was also his father’s – I had not previously known that he also bore it) was my Great-Uncle Dick.  When I knew him, he led a fairly down-and-out existence.  He scraped a living by farming a small-holding at Spalding Common and lived in one of the short streets of council houses there.  I don’t recollect having had any meaningful conversations with him as a child; the Sherrard men were not particularly interested in girls.  However, my brother, the only boy of our generation, was regaled with all sorts of treats and confidences.  When we were both adults, he told me some of the family history that he had gleaned from Uncle Dick and his two surviving brothers (the eldest brother, John, had been gassed in the Great War and died in the 1920s).  He said that Uncle Dick had told him that he was once the owner of a thriving haulage business, with a fleet of lorries that carried vegetables and livestock across the Fens.  More roguishly, he admitted that he had plied a flourishing black market side-line during the Second World War.

I only half-believed this tale, because the Uncle Dick that I knew was anything but a prosperous businessman.  I therefore rather assumed that it had been invented to satisfy a small child’s curiosity and also to imbue his old uncle with a touch of glamour.  (‘What did you do in the war, Uncle Dick?’  ‘Oh – ha, ha, ha – I was a bit of a scoundrel; I sold stuff on the black market.  It didn’t harm anyone; I just helped people to get the things that they needed.’)  Now, however, I have found proof that at least some of Uncle Dick’s story was true: he was indeed a haulage contractor.  The question is, did he really own a fleet of lorries, or just one antiquated, clapped-out lorry that was pressed into service for the war effort?  And, if the former, what happened to them all?  Might they have been confiscated because his nefarious activities were found out?  Might the haulage business even have gone downhill because he was disgraced, or sent to prison?  I don’t suppose that I shall ever find out and, since my own version of events is probably more colourful than the truth, I’m not sure that I really want to!