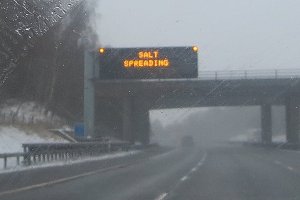 On Friday 18th January, Chris Hamilton-Emery tweeted his surprise, excitement and satisfaction about Salt Publishing’s impressive January follower statistics: “Goodness me! 76,000 Twitter followers! Not bad for a Norfolk indie publisher …”   Now this icy winter’s snow showers are blowing westwards off the continent and the North Sea, moving relentlessly inland, all across East Anglia and the Cambridgeshire and Lincolnshire Fens and thence to the Midlands, to London, the home counties and all places west and south, and northwards to the Pennines and to the wild and windswept Celtic lands, SALT is everywhere.  The proof is there for all to see on the motorway gantries: SALT SPREADING.   The warm centre of Salt Publishing, at ‘Salty Towers’ in Cromer, is quietly melting the hearts of the nation and of the cognoscenti beyond these shores with a constant sprinkling of poetry, short stories and novels, for SALT is essential to human life and adds a flavour to the dullest day.  It preserves our sanity and we put down its stores of beautiful language for immediate use and to save for later, packaged in covers so original that our taste buds are tingling before we even tuck in to the goodness inside.   No fear that supplies will run short, however great the demand!  The SALT staff are working day and night to ensure that the needs of the population are met; the trucks are rolling and the deliveries are getting even to the remotest places along previously impassable routes.  It’s happening: SALT is SPREADING!

SALT is not only my own publisher – it is also my favourite publisher.  I have followed its fortunes since it emerged, butterfly-like, from the chrysalis of a poetry magazine thirteen years ago.  I have been delighted to watch and share in its successes.  Almost from the start, its poets won acclaim and prizes; when it branched out into short stories, many already distinguished authors wished their work to appear under the SALT imprint.  More recently, it has developed fine literary and genre fiction lists.  It won its first big fiction accolade last year, when The Lighthouse, by Alison Moore, was shortlisted for the Man Booker prize.

I am proud to see ‘SALT’ on the spine of my book.  I am fascinated by its enigmatic name.  I know that this derives from the salt marshes in the area of Australia where the poetry magazine was founded; but ‘salt’ is also a fundamental word.  Customs and sayings relating to it are deeply embedded in our culture.  Every school child is taught that the word ‘salary’ derives from ‘salarium argentum’, the salt money that was given to Roman soldiers so that they could buy the condiment that made their food palatable.  Later, in mediaeval times, when everyone in the lord’s hall ate at the same long trestle table, the centrepiece was an elaborate salt cellar.  Only nobles and gentry could choose to sit ‘above’ it; servants and other lesser mortals had to seat themselves ‘below the salt’.   This sceptre’d isle is surrounded by the salty sea and ‘old salts’ are former venturers upon it, who may or may not be ‘the salt of the earth’!  A tradition still kept in some rural societies involves throwing salt over your shoulder when you’ve sneezed, to keep the devil at bay.  Bread, salt and wine are traditional gifts for newlyweds or, sometimes, new neighbours.  Salt with a small ‘s’ is everywhere in our heritage.

And SALT with a big ‘S’ is continually getting stronger.  Its founders, Chris and Jen Hamilton-Emery, have seen it through some tough years.  With tenacity and optimism they have put their faith and energy into this fine independent publishing house which never compromises on the quality of the work that it publishes or its standards of presentation.  Some wonderful SALT books were published in 2012 (see the SALT carousel) and some great ones are coming in 2013.  SALT is SPREADING.  The Highways Agency says so.  It’s official. 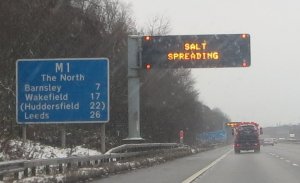