New Year’s Day 2014 was one of the most varied and interesting I have ever experienced. It began with breakfast in Bad Reichenhall, a small Bavarian town that nestles among the mountains on the Austrian border, on a cold but sunlit morning. My friends and I then drove to Schönau am Königsee, a traditional Alpine town just south of Berchtesgaden that has become a winter sports resort, and took a small circular walk around part of the Königssee, a lake etched so deep into the landscape that it looks like a Norwegian fjord; it’s Germany’s third deepest and well known for the echo created by its rocky walls. There is a church on the other side of this lake, but the sun was shining so brightly, with its light reflected so brilliantly on the surface of the water, that it was impossible to see through the glare.

Towards the end of the circular walk is a ski slope which is in constant use, thanks to snow machines. (Somewhat bizarrely, there is a hen-run to one side of it, complete with a wooden chicken coop on wheels and several brightly-plumaged hens.) Unable to ski myself, I marvelled at the grace and speed with which the skiers descended. There were some snowboarders, too: mostly children, who were tackling the challenge of the swift descent with extraordinary confidence and fluidity of movement. 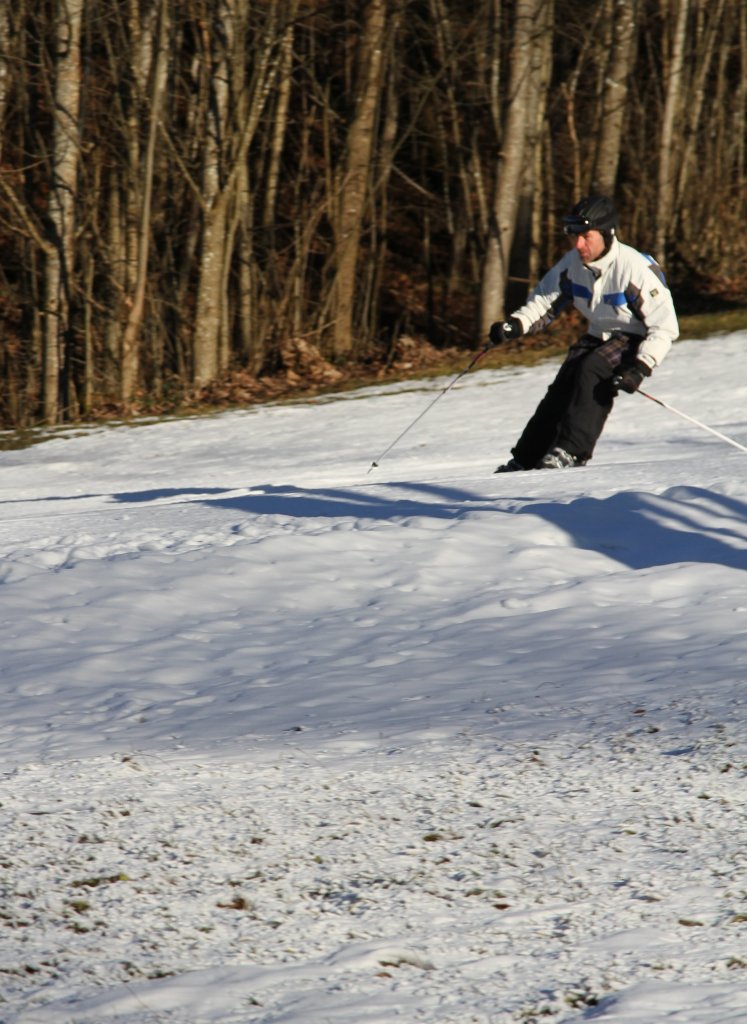 Enjoying winter at Schönau am Königsee

The town itself is a bit of a tourist trap (I’m not sure what kind of Alpine souvenir a fluffy pink teddy bear represents), complete with live ever-so-genuine-Bavarian volksmusic, but by climbing beyond the car park and the town we swiftly reached the Olympic-standard permanent sled run.

The World Cup 2013-14 season for both skeleton and bobsleigh ends here on January 26th 2014, and by chance and great good fortune we were able to watch several of the national teams practising solo skeleton, which is an even hairier version of bobsleighing: the competitor lies face up, feet first, on a small sledge as it zooms down the ice track. His entire journey takes less than a minute. 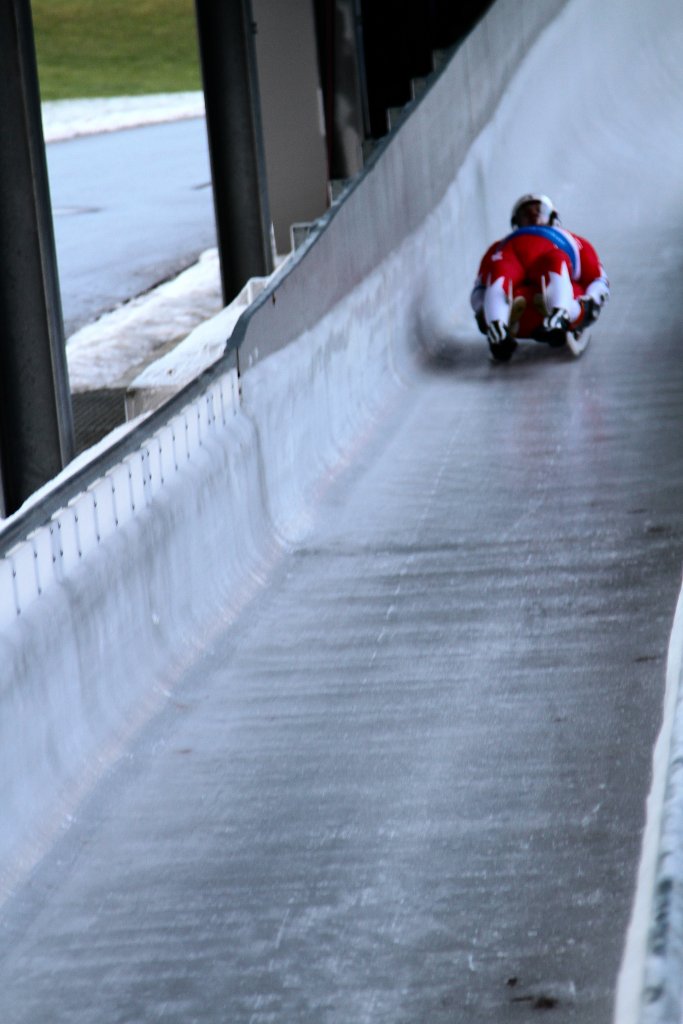 One rider came to grief as he passed us and skithered on his side to the final bend, where he came to an ignominious halt and clambered in ungainly fashion over the barrier, clutching his sledge. He was embarrassed and annoyed, but otherwise unharmed.

By this time, it was getting dark, but we were keen to complete our excursion by making a short detour to the site of the Berghof, Hitler’s Alpine home and headquarters. Beyond this lies the Eagle’s Nest, the bolt-hole to which he planned to withdraw in the event of a defeat while he was in residence at the Berghof. Of course, he was in his Berlin bunker when the Allies finally closed in on him, but I was interested to be informed that, although the Berghof was first bombed by the RAF and then torched by the SS troops just before their departure, the Allies decided to leave the Eagle’s Nest itself intact. It still stands to this day, as a café-restaurant, though cannot be reached in the winter.
The Berghof itself has been reinvented as a ‘documentation centre’. It is also now a small tourist attraction, with some access to the bunker system, together with a car park, a restaurant and a shop. The ascent to it from Berchtesgaden is steep, and the road precarious: there is no barrier for much of the way and the drops below the bends are lethal. I imagined the people of Berchtesgaden and the Obersalzberg area going about their business over seventy years ago, prevented by a closely-patrolled security cordon from their earlier nineteen-thirties jaunts up the mountain to catch sight of Hitler, only vaguely aware that something ‘important’ was going on above them when Hitler’s soldier aides descended upon the town to buy supplies.
Unfortunately, the document centre was closed on New Year’s Day, so we were unable to view the grim records of the Third Reich that it houses. It may have been because of this, or perhaps owing to the beauty and almost sacred tranquillity of the place – which, save for that one short period of depraved activity, has obtained almost since the dawn of mankind – that I could gather no real sense of the evil that once lurked there. It is true that there are clues for those who care to look for them: for example, the distinctive archways that now form the windows of the shop were once part of Hitler’s garage complex, as the footage from old films, shown on a constant ‘newsreel’ in one of those windows, illustrates, but I experienced none of the deathly despair and outrage that visits to other wartime sites have prompted in me. I suppose that that in itself is a triumph: a sign that the bedrock of primeval goodness in this place has triumphed over the temporary evil that it once harboured and then cast out.
Happy New Year, everyone!

All text and photographs on this website © Christina James