And now for something completely different… 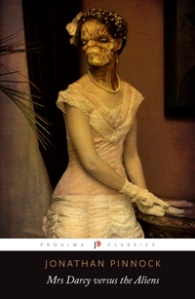 Jonathan Pinnock managed to get a brief, but positive, mention in The Independent last week for Dot Dash.  He was delighted at this, but also a bit sorry that Mrs Darcy versus the Aliens did not attract media reviews.  Though Mrs Darcy is not a crime novel, it is a crime that newspaper reviewers passed over it.  I here redress the balance, for a story in which George Wickham’s character is somewhat redeemed.   I should also point out, on this happy 200th anniversary of Pride and Prejudice, that no Jane Austen romance was harmed in the writing of Mrs Darcy versus the Aliens.

This book is to anachronism what well-rotted farmyard manure is to plants: in its fertile whimsical compost , you can expect to find flourishing together such conventionally-unrelated references as Natalie Imbruglia’s Torn and Sir Humphry Davy’s scientific experiments; Colin Firth’s damp Darcy shirt and Kurt Cobain’s Maggot; text (tux’d) messaging (oh-so-beautifully phrased) and carrier pigeons on the ‘superflyway’.  If you are a Jane Austen purist, this book may not be for you, but don’t rush to damn it, for it is an ingenious blend of such varied stimuli as the tentacular spectacular Species film, the BBC’s Pride and Prejudice, the Keira Knightley/Matthew Macfadyen Pride and Prejudice, Jane Austen’s Pride and Prejudice, Monty Python’s Flying Circus and The Fast Show, together with a pungent flavour of The Hitchhiker’s Guide to the Galaxy, Ghostbusters and Dr Who.  Its wit sparkles, whether echoing (and/or making fun of) the language, characterisation and settings of Jane Austen’s novel, or making satirical references to the absurdities of our contemporary world and its preoccupations.  The language of its characters, evoking the streetwalkers of Whitechapel, the rustics of rural England, the servants of big houses and their betters, is splendidly risqué and quite deliberately bad-pun-infested; it is full of sauce.

You can go spotting other references if you wish, for they are there a-plenty, such as a hint of The Good, The Bad and The Ugly’s Lee Van Cleef, merrily moulded into an anachronistic ‘Lee Van Enfield’ rifle, or you can pick up on Jane Austen’s Mr. Bennet’s minor reference to the likely failure of Jane and Bingley to conserve their wealth and to avoid being cheated by their servants, developed into a major outpouring of their resources to scamsters; and, talking of money, Bradford and Bingley and Northern Rock step up to the author’s line to salute us.  The dialogue in the dirigible (don’t ask!) has echoes of Sherlock Holmes and Dr. Watson.   A satirical swipe at the annual costumed Jane Austen Parade in Bath (and, thereby, at the Janeites of the world as a bunch of zombies) is a pleasing touch to those who value Jane Austen’s work as it is, not as her ‘fans’ would have it be.  Jane Austen tourism comes under a blistering attack, too, and an in-joke (with lovely irony at the author’s own expense) slaughters all of us wordmongers: ‘Best to stay clear of them writer types in future – nutters the whole lot of them, apparently.’  Even the cheating tactics of car hire companies come under fire.   Glastonbury Festival and its mud is sent wallowing in a cutting thrust at our society’s modern attitudes to drugs, sex and relationships, as well as at the establishment.  The two pièces de résistance of the whole book for me, however, are Mrs. Darcy’s eventually wonderfully-assertive and liberated character and, if you’ll forgive a touch of irony from a genuine lover of Jane Austen’s novels, Colin, Lieutenant Pigeon: I didn’t need a satnav ghost to take me back to the seventies and Mouldy old dough (I can hear that gravelly enunciation clearly!).

Like Species, the way is left open for Mrs Darcy II and it will be funny and absurd, like this one:  ‘Too, too silly’, but a complete romp.  If you haven’t read Mrs Darcy versus the Aliens, you should; it’s a frolic to enjoy on Pride and Prejudice’s birthday.