Harlow Carr: just the spot for a signing session! 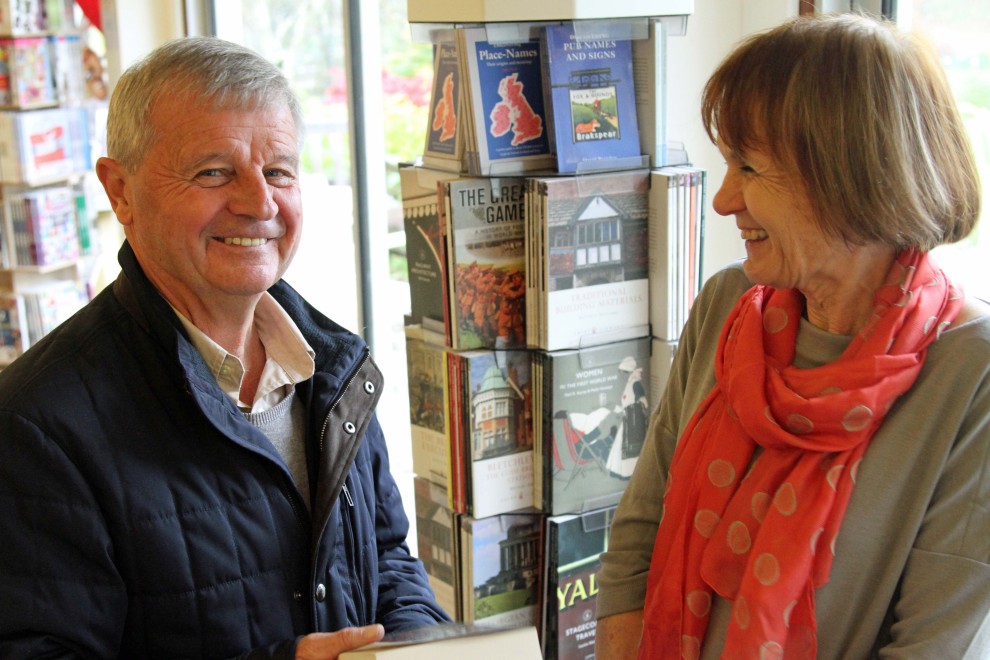 Yesterday, I felt amazingly lucky to have been invited to launch The Crossing at the bookshop at Harlow Carr Gardens, near Harrogate in North Yorkshire. (Strictly speaking, it was a pre-launch, my first ever!) I’ve been to Harlow Carr before, but a long time ago, and I think my first visit pre-dated the shop. It’s certainly well-established and flourishing now: it’s one of the loveliest bookshops I’ve visited and, some of its customers told me, undoubtedly the best one in the Harrogate area. Far from hiding its light under a bushel (or perhaps a pergola), it has succeeded in building up a huge clientele from many miles around. If you are ever in the vicinity, it’s well worth making a detour.
Yesterday dawned late. The weather was cold and squally, with sharp downbursts of torrential rain. As I drove further north, fewer and fewer leaves were clinging to the tress, while the roads and pavements were a whirling mass of auburn, chestnut and brown as the less tenacious ones came tumbling down and as rapidly began to disintegrate into sogginess.

My view of patio, gardens and woodland

At Harlow Carr, the rain was thick and steady. The place is in quite a sheltered spot, in a hollow after a hilly climb on winding roads, so the trees that line the walks and the woods that form a backdrop to the formal gardens were still respectably clothed in gold and russet (though a vicious wind in the afternoon dislodged many of their leaves and set them swirling and eddying around the patio outside the shop). The shop itself was a haven of warmth and hospitality. Yesterday marked the launch of its Christmas stock: the bookshelves were heaving with tempting new titles and the rest of the shop was equally festive, a cornucopia of beautiful displays of cards, toiletries, accessories, seasonal decorations and all things Yorkshire.

I was welcomed by Isabel and Nige, who showed me one of the best displays of my books I’ve ever encountered (helped, of course, by the fact that there are now four of them, clad in the distinguished Salt covers designed by Chris Hamilton-Emery, of which I am always so proud). My signing session was scheduled from 13.00 to 16.00 and, as it was already after 12.30, Isabel whisked me and my husband to Betty’s (Yes, Harlow Carr has a Betty’s as well! For the uninitiated, Betty’s tea-rooms are second to none on the planet.) to choose a delicious sandwich lunch. Then it was back to the staff room in the bookshop for a cup of tea. This was actually one of my favourite parts of the day. There are similarities between the staff rooms in bookshops the world over, so new ones are always reminiscent of my bookselling days and whenever I’m invited into one I immediately feel at home.
My three-hour signing stint passed all too rapidly. I met some very nice people and engaged in conversations on a huge variety of topics, from tractor seats to the novels of Peter Robinson and how I schedule my own writing. It was a new kind of audience for me: practical, engaged, leisurely. Almost everyone was wearing wellingtons or hiking boots. Many pushed children in buggies. All were wrapped up in glistening waterproofs against the rain.

And very many people stayed in the shop for long periods of time, some of them upwards of an hour. I don’t think that it was just because they were sheltering from the rain: there is a rich variety of other places within the Harlow Carr complex where they could have done that. They were genuinely interested in (all kinds of) books and writing and also extremely careful when it came to choosing the ones they were going to buy. Every sale was the result of considered deliberation, whether of my books or those of other writers. It made me very proud and appreciative when the choice fell on one of the DI Yates novels!
I loved this shop immediately and appreciated the many kindnesses and efficiencies offered by all of its staff, especially Isabel, who continued to look after me for the whole afternoon until, off duty, I was able to roam the floors and make some purchases of my own. Isabel and Nige said that they’d only just started arranging author events (though you wouldn’t have known it from their professionalism) and kindly offered to keep in touch and invite me again. I shall be there like a shot!
I left one small present of my own: a complete set of the four DI Yates novels for the shop to raffle. Everyone who buys one of my books over the next month will be offered a raffle ticket, and the winner will receive the full set of books after the draw. If you live in Yorkshire or are planning to visit the county between now and the first week in December, perhaps this might provide a further small temptation for you to track down a very great bookshop!