Let me lead you to Leeds… 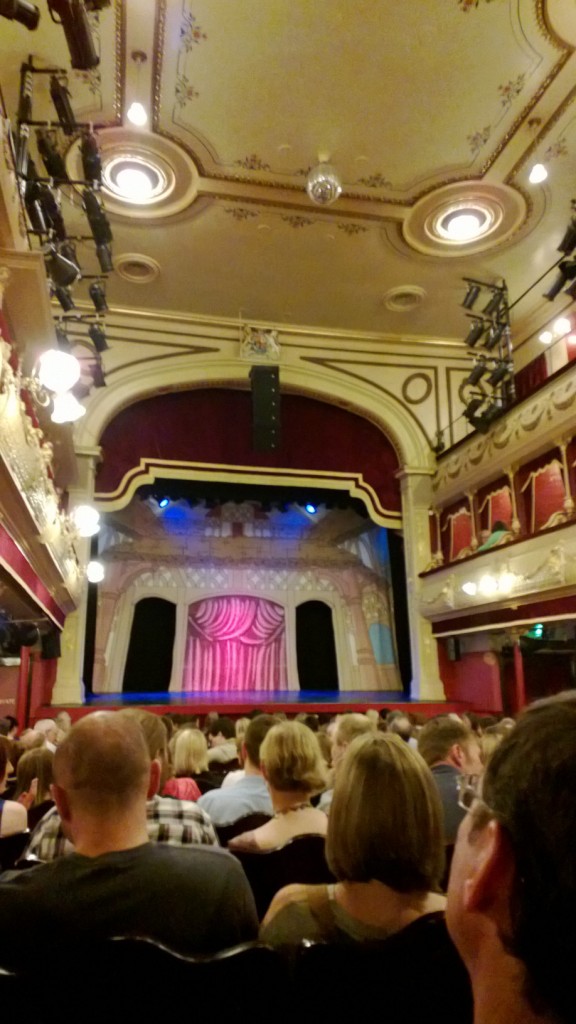 I spent yesterday evening at Leeds City Varieties, watching the Reduced Shakespeare Company [RSC!] giving its version of The Complete Works of Shakespeare Abridged: a wonderful performance, hilarious and exhilarating.  The City Varieties provides a fitting venue; it is one of Yorkshire’s great Victorian theatres (Leeds is doubly blessed: it also has the Grand Theatre, now home to Opera North) and is the site of many decades of performances that, like this one, demand participation from the audience.

In case you’re not familiar with it, The Complete Works of Shakespeare Abridged is a comedy which aims to restore the bard to the public conscious by evoking helpless laughter from its audiences.  It is very funny and gently satirical. Reed Martin and Austin Tichenor, the authors, are from the USA and jokingly assert that they ‘thought Shakespeare was American.’  More seriously, they say that they were disturbed by a recent survey that suggests that today’s children have not heard of Shakespeare and that more than a quarter of adults haven’t read his plays.  So they set out to put the record straight.  It’s a touring production and it will have visited forty different towns and cities in the UK by the end of this year.

Every play is covered, though some are just mentioned by name – in the case of several of the comedies, by an amalgamation of parts of all their names and plots.  The actors, Gary Fannin, Matt Rippy and Matthew Pearson are quick-change artists.  Gary Fannin in particular amuses with his pained expressions and Matthew Pearson with his very unlovely and regurgitative renderings (he values excessive vomit!) of Shakespeare’s most famous heroines: his Juliet is a sturdy lass who sulks and has tantrums; his Ophelia looks as if she has been rolling in a midden.

Almost the whole of the second part of the performance is devoted to Hamlet and the trio surpasses itself when offering (forwards and backwards!) its version of what for me is Shakespeare’s greatest play.  These three actors also, incidentally, demonstrate through their delivery of ‘straight’ snippets that they are capable of orating Shakespeare ‘properly’ if they choose.  Taken as a whole, The Complete Works of Shakespeare Abridged is about much more than slapstick.  Nevertheless, the choreography and timing of the knockabout scenes has been honed to perfection: the actors are so nimble that their movements are almost balletic.

Despite prancing, dancing, running, fighting, wooing and declaiming on the stage for almost two hours, the cast of three was game for meeting members of the audience afterwards to sign programmes.  I happened to descend the stairs of the theatre just as they were setting up their table for this and all three of them signed mine.  They must be the first autographs I’ve collected in thirty years, unless you count copies of novels presented to me by their authors when I was a bookseller!

I’m very grateful to my husband’s colleagues for inviting us to the play, and especially to Julia for getting the tickets; it isn’t the first time that she has gathered us in this charming music hall setting, familiar to followers of the BBC’s ‘Good Old Days’ programme which went out for decades, with Leonard Sachs as the compère who alliterated for a living.  I’d like her to know that this was the best evening out I’ve had this year. Afterwards, we walked through the streets of Leeds in the dusk and enjoyed a meal together.  Leeds has long been my favourite English city and is at its best in the early summer.  An enchanting and enchanted evening, indeed.

If you get the chance to see this play, don’t turn it down!