Banks on form – opinion from a regular investor… 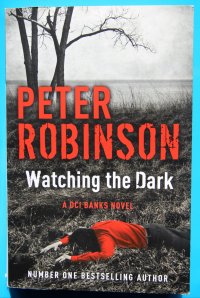 I am a Peter Robinson addict – I think that I have read all of his books and I’ve certainly read all of the Banks novels.  I’ve just completed Watching the Dark, which was one of the books that I bought during my trip to Gower Street last week.

This is Banks back on track, after what I felt was a slight dip in performance with Bad Boy.  The novel is set partly in Yorkshire, partly in Tallinn, and involves a cold case murder that is reopened after an Estonian investigative journalist is found dead in a remote ruined Yorkshire farmhouse that has been used as accommodation for immigrant workers.  The novel explores the vicious exploitation of guest workers by employment agencies and loan sharks, as well as highlighting the dangers to young girls of getting drunk when alone in foreign cities.  The descriptions of Tallinn are evocative and convincing; in his Afterword, Robinson says that he visited the city in order to research the novel and pays tribute to several of its inhabitants who helped him.

Banks has had a chequered romantic career.  Robinson has now chronicled the good years, the ultimate disintegration of his marriage to Sandra and his affairs with several other women, especially the on-off relationship with his colleague Annie Cabbot.  He is possibly indicating that the Annie relationship has completely run its course by introducing a new, glamorous policewoman, Inspector Joanna Passero, in this novel.  The relationship between her and Banks gets off to a rocky start and there is no sexual element to it – yet.  However, the signs are there: by the end of the novel, she has confessed to him that she is worried that her (Italian) husband is being unfaithful to her.  My guess is that the scene is now set for some torrid episodes with Banks in the next of the series!

I enjoyed Watching the Dark hugely.  However, I have to admit that reading the Banks novels has become for me the equivalent of eating a box of chocolates – something to be devoured almost without thinking, for the sheer comforting pleasure of knowing exactly what will be delivered.  Perhaps because they are so predictable, I don’t think that the latest two Banks books have come anywhere near another recent Robinson title in which Banks doesn’t feature: Before the Poison.  I read this almost a year ago, and thought that it was masterly.

Bodies in the library… not what you might think!

I was a little dismayed when I studied the latest Public Lending Right [PLR] figures over the weekend.  I’m a great supporter of Public Lending Right; I remember when it was first set up thirty years ago.  Originally campaigned for by authors like Brigid Brophy and Antonia Fraser, and more recently Andrew Motion and Monica Ali, its purpose is to make payment (from a fund awarded by the government) to authors whose books are borrowed from public libraries.  The Authors’ Licensing and Copyright Society [ALCS] grew out of the original campaign.  I met John Sumsion, its first director and the genius behind the system that computes how much each author should be paid, several times before his untimely death (he had previously worked in I.T. in the shoe industry) and am proud to be able to count its present director, Dr. Jim Parker, who has now been at the helm for twenty-five years, a good friend.  He has not only worked tirelessly to support PLR in this country, but has also acted as its ambassador in many countries across the world.  He is a published historian who has written brilliantly about the East India Company.

Back to this year’s figures, though.  Unsurprisingly, crime novels feature prominently on the lists of books borrowed in 2011-2012.  So far so good.  I’m by no means a xenophobe when it comes to reading and appreciating the work of other authors, as my blog-posts will testify, yet I do find it a little disheartening to see that, of the twenty crime writers most-borrowed in British public libraries, American authors predominate and that only three British authors – MC Beaton, Agatha Christie and Ian Rankin – have made the top twenty at all.  Yet more astonishing is that Ian Rankin, whose books account for 10% of all the crime novels sold in the UK (according to book-industry-produced statistics), ranks as only the twentieth most borrowed author.

Book trade research suggests that people who borrow books also buy books and therefore that libraries and booksellers are not in competition with each other, but have a symbiotic effect on each other’s activities.  I wonder how the PLR figures fit in with this?  Do people borrow books by authors different from the ones whose works they buy?  Are the shelves of our public libraries more heavily stocked with books by American than by British authors and, if so, why?  Or is it the case that people are so impatient to read the latest Ian Rankin, Stephen Booth or Peter Robinson that they don’t want to wait for it to become available in the library and so go out and buy it or order it online, at the same time taking out a James Patterson to tide them over?   This last is the most optimistic explanation that I can think of, but I should love to undertake some proper research to substantiate my theory!