The last of my Kraków posts is the one that recalls for me the most special time of my visit. I should explain that I went to Kraków in order to facilitate the meetings of an international librarian advisory panel. We were very privileged to have as our host Marek Krośniak, the Serials Acquisitions Librarian at the Jagiellonian University Library in Kraków. Marek not only allowed us to hold our meetings at the library, but also arranged for us to take a tour of some of its priceless treasures.
The Jagiellonian University, founded in 1364, is one of the oldest academic foundations in Europe. Its collection of manuscripts, incunabulae and other rare printed books dates from every period of its existence and is incomparable. It includes an extensive collection of handwritten scores by famous composers. Also amazing is the knowledge of the librarians who curate this collection. No less than four specialist librarians explained the rarest treasures to us. (Understandably, security was tight: the door to the room holding these volumes was locked behind us and each of the books was stored in a locked glass case. There were also security guards in attendance.)
I have a fairly large collection of photographs taken during the tour (all without using flash, as requested). It was difficult to make the choice, but I have selected four that I hope will illustrate the distinction and diversity of the whole collection. First is the original manuscript of Copernicus’ De revolutionibus, in which he presents his theory of the heliocentric system of the universe. This autographed manuscript never left his possession in his lifetime and the first printed edition of the work was from a copy made by his pupil, Georg Joachim Rheticus. Famous throughout the world, it was acquired by the Jagiellonian in 1956 and is possibly the library’s pièce de résistance, though there are many other contenders for this crown. Second is the first missal with an illuminated flower border to have been produced in Kraków. It belongs to the high mediaeval period (and is reminiscent of some of the early books that I saw in the University of Barcelona library and wrote about earlier this year). 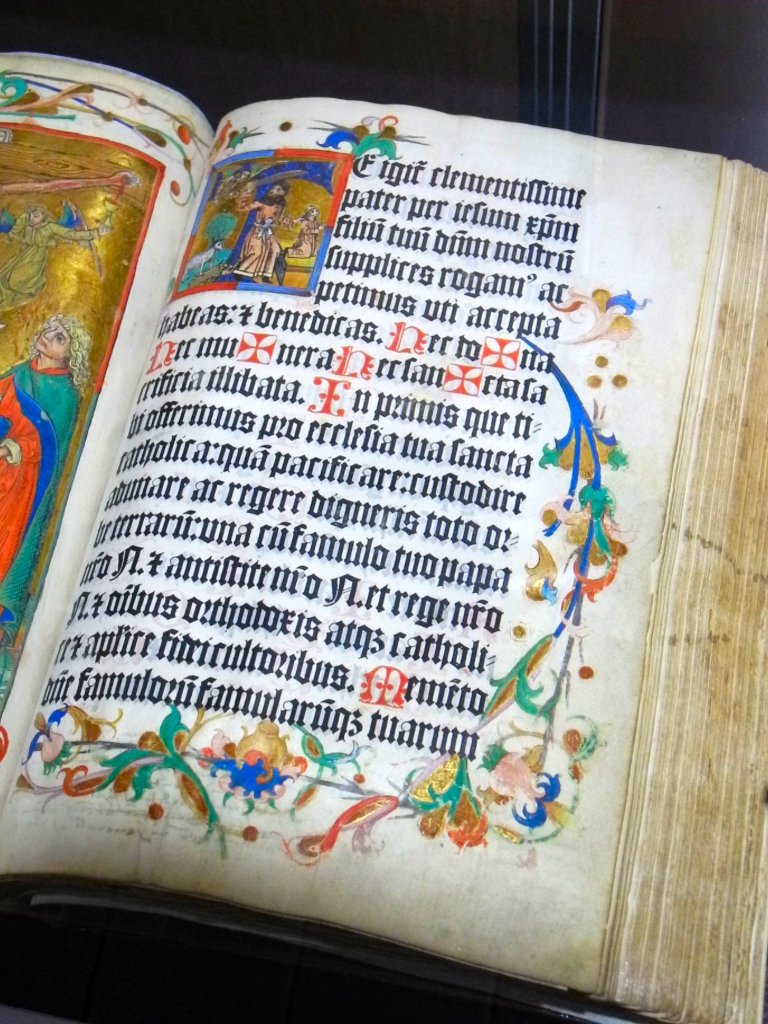 Third is the earliest known book to have been printed in Cyrillic characters. Fascinatingly, it is also one of the earliest extant proof copies: in the photograph, you can see the printer’s corrections on the pages.

Finally, there is one of Mozart’s handwritten scores, this a one-act Singspiel, or comic opera, called Bastien and Bastienne, written when he was a boy and performed in the open air in 1768. The library’s large collection of original scores includes works by Berlioz, Chopin, Bach, Beethoven, Mendelssohn Bartholdy and other famous musicians, but Mozart had a special relationship with Kraków (and is possibly the world’s favourite composer), so that’s why I have chosen to feature his work here.

Mozart’s score for ‘Bastien and Bastienne’

It is difficult, if not impossible, to convey how exciting it was to be allowed to see these beautiful books and to learn their history from experts. I hope that I have managed to share a little of the excitement with you. And I’d like to thank Marek Krośniak and his colleagues very much indeed for providing all of our party with this wonderful opportunity.

All text and photographs on this website © Christina James