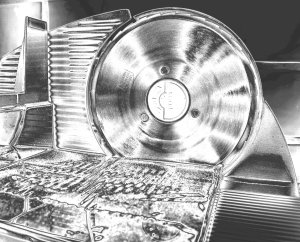 I’ve been asked by several readers of In the Family about the shop where Doris Atkins lived; it was also, of course, the place where she was murdered.  As I’ve written in a previous post, this shop was drawn almost entirely from my memories of the establishment that my great-uncle kept when I was a child.  My grandmother lived there, too, and was effectively the housekeeper.  It was the house in which they’d both grown up.  My great-grandfather died in the 1930s, but my great-grandmother was still alive when I was born.  I have a very vague memory of her sitting up in bed, a tiny frail old lady with waist-length snow-white hair.  She died a horrible death by falling on an electric fire.

The shop itself had been the front room of the fairly substantial family home, built, I’d say, in the mid-nineteenth century.  It would be incorrect to call it a terraced house; it was rather one of those houses that you still find in some old towns: detached, but snuggling right up to its neighbour.  The neighbouring building on one side was a much smaller, newer house; on the other, the Punch Bowl pub (where dancing lessons were held on Saturday mornings: my grandmother tried in vain to persuade me to learn tap-dancing).  The address was Westlode Street, as in the novel.  I’ve since discovered that this is the only street in the country bearing this name.

The shop itself was relatively modern.  Although my great-uncle was a Scrooge-like character (he would give my brother and me packets of out-of-date jelly babies and dolly mixtures at birthdays and Christmas), he had spent some money on modernising it, possibly because he’d once run foul of the environmental health department at Spalding Council.  My grandmother was certainly an obsessive cleaner and scrubbed the floor and all the surfaces in the shop every day.  The bay windows on either side of the door had been converted into ‘picture windows’ that took displays.  There was a tall, glass-fronted cupboard which was filled up every day by the Sunblest man with loaves of bread, tea-cakes and currant loaves.  He usually also brought a tray of cream cakes. The cream was all the colours of the rainbow; I shudder now to think of the dyes that must have been used in these creations.  Another daily visitor was the pop man: my father told me that his visits had removed the need for the shop to make its own carbonated drinks; as a schoolboy, he and his friends had had fun making fruit sodas three times as effervescent as they should have been!

The shop also had a manual ham and bacon slicer – one of those fire-engine red machines with a lethal circular cutting blade to be seen in most general shops of the time – and several fridges, including a shiny rectangular-shaped Frigidaire with a glass display front that was great-uncle’s pride and joy.  It did not impress me as much as the squat, square fridge in which he kept ice-cream.  I was intrigued less by the contents than by the mystery of its black rubber lid; this was several inches thick – presumably for insulation purposes – and too heavy for a child to lift (which may have been part of its attraction for its owner – there was no risk that his great-nephews and -nieces would plunder the stock).

Pocket-money sweets were laid out in trays near the till, right under great-uncle’s nose.  He always wore a long, dun-coloured shopman’s coat and was rarely seen without his trilby hat. When he wasn’t busy serving, he sat in the shop on a tall stool, painstakingly writing out the price-tags that were stuck into meat and vegetables on vicious-looking skewers. He had a few secrets under the counter, too.  For years I wondered what the box labelled ‘ONO’ contained and why my mother was so cross when I tried to look inside it.  It was only after I had left home that I read in a novel that this was the brand-name of a type of contraceptive.

But the crown jewels of the place, for me and for all children who visited, were the serried ranks of tall sweet jars that stood on shelves along the back wall.  They were uniform in size and shape, with thick lids of many colours – perhaps made not of plastic, but of one of its predecessors, such as Bakelite. They contained bulls’ eyes; mint imperials; Fox’s Glacier Mints; Nuttall’s Mintoes; Bluebird liquorice toffee; Milk Maid dairy toffees; aniseed balls; gobstoppers; red liquorice strands; black liquorice strands; winter mixture; chocolate Brazils; Liquorice Allsorts; Payne’s Poppets.  I could go on.  They looked so beautiful standing there together, a hymn to the confectioner’s craft.  Choose a quarter of any of them – it would be conveyed by a tin trowel to a narrow, trough-like pair of scales – and their spell was broken.  Their real charm was collective; it resided in their magnificent diversity of shape, colour and size.  They inspired a sort of sensory holy grail quest that making no single choice could ever satisfy, because their pull was visual as well as visceral.

I had hoped to write about the house behind the shop, but I’ve probably said enough for now.  I’ll come back to it in a future post!