A profoundly moving and informative read… 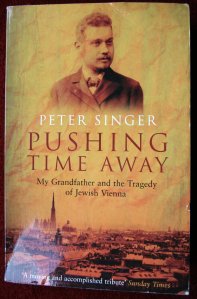 Pushing Time Away, by Peter Singer

When I completed Pushing Time Away, by Peter Singer, I felt as if I had absorbed so much information that I needed a light read to counterbalance it; then, when I tried to get into a novel – and it was an intelligently-written novel – it seemed too lightweight, so I had to put it down and return to it the next day.

Pushing Time Away is another of my son’s books, temporarily purloined when I last visited his house.  (As I’ve said before, I love browsing other people’s bookshelves and always find something that I’m desperate to read there.)  The author is an Australian academic who was asked to go through his elderly aunt’s papers when she was taken into care.  In the process, he discovered a rich treasure trove of information about his grandparents, including hundreds of letters written by his grandfather to his grandmother.

Beautifully written, it is an unusual book in several respects.  It provides a graphic account of what life was like for middle-class intellectuals living in Vienna in the first forty years of the twentieth century; it tells how Singer was at first shocked, and then fascinated, to discover that both of his grandparents were bisexual; and it recounts the vicious power struggles that took place between Sigmund Freud and his disciples when they dared to question Freud’s theories.  The last of these is well-documented elsewhere, but Singer brings to it a fresh perspective as he shows how David Oppenheim, his grandfather, a gentle scholar who hated conflict, was unwillingly forced to choose between Freud and Adler.  That Oppenheim chose Adler at a time when no-one had heard of him, and therefore renounced the scholarly acclaim that working with Freud could have brought him, bears testimony to his selflessness.

Another aspect of the book which has also been recounted many times, but still gains fresh immediacy from being based on the feelings and experiences of one family, is the fact that, until Kristallnacht, Jewish families living in Vienna were so well assimilated that they had no thought of falling victim to Hitler’s ethnic cleansing policies, even though they were aware of them.  David Oppenheim had been awarded a medal for bravery for fighting for the Kaiser’s army in the First World War and so, even as Jewish ‘privileges’ in the city were reduced daily (at first Jews weren’t allowed to walk in the woods, then to hold public posts and finally to own bank accounts), he was convinced that the fact that he had fought for his country would save him and his wife.  They did not leave for Australia with their two daughters, first because they were still learning English and then out of solidarity with Peter Singer’s father’s parents, who were unable to obtain exit visas.  David Oppenheim and his wife, née Amalie Pollak, were eventually sent to Theresienstadt, where he quickly succumbed to the rigours of poor diet and no medication (like his sister, who died aged sixteen, he was a diabetic; one of the many interesting insights that this book offers is how terrible a disease diabetes was before the invention of insulin injections).

The book gains great power from its understated matter-of-factness.  At no point does the author resort to sensation; he doesn’t need to, because the facts speak so eloquently for themselves.  The only slight quibble I have is with the unadulterated admiration that he displays for the grandfather that he never knew (Amalie survived the war and spent her last years in Australia when he was growing up).  What Singer says about David is slightly at odds with the documents that he quotes.  Certainly, David was gentle, erudite and earnest.  I’m less convinced that he was an early exponent of male / female equality.  He may have paid lip-service to this ideal; nevertheless, it was Amalie, a far more brilliant scholar than he and one of the first women to be awarded a degree (in Maths and Physics) by the University of Vienna, who gave up all her career prospects when they married and subsequently dealt with all of the practicalities of their daily lives, while David concentrated on his studies.  This sounds to me like par for the course for intelligent women who lived in the early twentieth century.  It was also Amalie who showed all the fortitude and resourcefulness as their world collapsed, while David sank into depression (though his ill-health might have been partly responsible for this).

Pushing Time Away is not a comfortable book to read, but it is compelling.  It makes a far greater impression than a more polemical exposé of how the Holocaust affected this family would have done.  I know that it will stay with me.